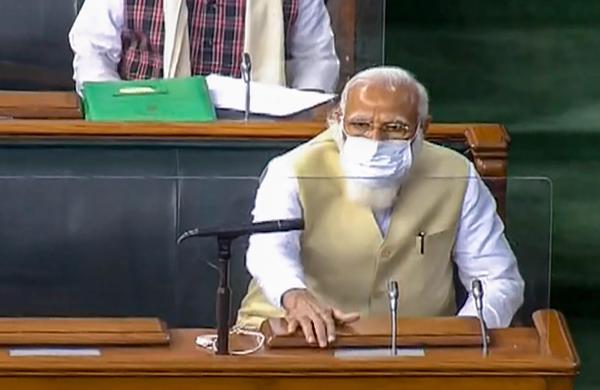 By Online Desk
Expansive at times, combative at others. That was Prime Minister Narendra Modi in his speech in the Parliament on Wednesday. He began by thanking the President.

The speech by the respected President showcased India’s ‘Sankalp Shakti.’ His words have boosted the spirit of confidence among the people of India, the Prime Minister said in his reply to the motion of thanks on the President’s address in the Lok Sabha.

There was praise for the women MPs too.

Congratulating the women MPs of the Parliament, the Prime Minister said, “During the discussion on the President’s speech, a large number of women MPs took part. This is a great sign. Women MPs have enriched the House proceedings with their thoughts.”

“We’re knocking at the doors of 75 years of independence. It’s a matter of pride for every Indian and an occasion to move forward. We may be in any corner or belong to any strata of society but we must make a new resolve of where we want to take India at the 100 years of freedom mark.”

Meanwhile, Congress and Trinamool MPs staged a walkout from the Lower House amid din.

On the farmers’ protests against agri laws

Speaking on the farmers’ protests that have been going on for nearly 90 days, PM Modi said, “This House, our Government and we all respect the farmers who are voicing their views on the farm bills. This is the reason why the topmost ministers of the Government are constantly talking to them. There is great respect for the farmers.”

“We can’t meet the challenges of the agriculture sector in the 21st century with thinking of 18th century. We’ll have to change it. Nobody wants farmers to stay stuck in the cycle of poverty, that he doesn’t get right to live. It’s our responsibility,” he added.

Amid uproar created by the Opposition parties, the Prime Minister stressed that the three farm laws were brought in by Government as these Agricultural reforms are important and necessary. “Congress MPs in House debated on the colour of the laws (black/white), it would have been better if they had debated on the content and intent of the laws. After the Laws relating to agriculture were passed by Parliament – no Mandi has shut. Likewise, MSP has remained. Procurement on MSP has remained. These facts can’t be ignored. Those who are disrupting the House are doing so as per a well-planned strategy. They are unable to digest that people are seeing through the truth,” PM Modi said.

Through such games, the trust of the people can never be won, he added.

On the COVID-19 pandemic

The PM said the world post-COVID is turning out to be very different. “In such times, remaining isolated from the global trends will be counter-productive.  That is why, India is working towards building an Aatmanirbhar Bharat, which seeks to further global good,” PM said in the Lower House, further adding that today we can hear ‘Vocal for Local’ in every corner of India. People look for local. This sense of self-respect is working a lot for Aatmanirbhar Bharat.

“Our doctors, nurses, COVID warriors, Safai Karamcharis, those who drove ambulances…such people and so many others became manifestations of the divine who strengthened India’s fight against the global pandemic,” he underlined.