Have over 6 GB of call data on illegal transfer of cops: Devendra Fadnavis 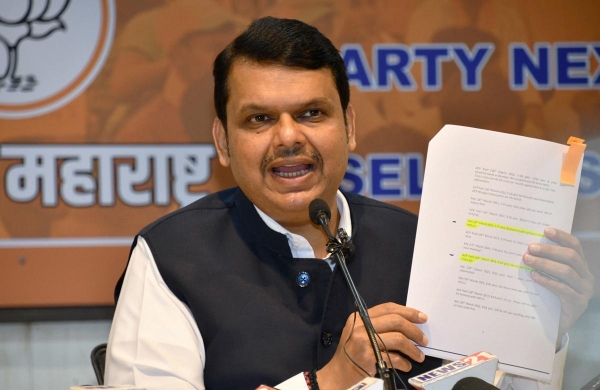 By PTI
MUMBAI: Senior BJP leader Devendra Fadnavis on Tuesday claimed the Maha Vikas Agadi (MVA) government in the state did not act on an “incriminating” state intelligence department report containing audio intercepts of a “large scale corruption” in police transfers and postings, and said he would seek a probe by the CBI.

Fadnavis said he had “6.3 GB data” of the calls intercepted by then Commissioner of Intelligence Rashmi Shukla with due permissions, where names of several key police officers were discussed.

All these phone calls were recorded by Shukla with due permission from the state government but despite the submission of the report to the Chief Minister (Uddhav Thackeray) in August, 2020, no action was taken on the report, the BJP leader said.

“I am demanding a CBI probe in this matter,” he added.

Hitting back at Fadnavis, the NCP, which is one of the constituents in the Shiv Sena-led MVA government, said the former was “misguiding” people.

“The report of then commissioner of Intelligence, Rashmi Shukla, has mentioned names of senior police officers, IPS officials, and politicians among others. It is a very sensitive information thus I am not disclosing the details of it currently,” Fadnavis told reporters here.

The Leader of Opposition also said that when he was chief minister of state, a tip-off was received in 2017 by some police officers about a meeting underway in a hotel regarding transfer of police officials.

“It was a part of racket and completely illegal hence a raid was conducted and arrests were made,” said Fadnavis, who had held Home portfolio when he was chief minister.

“Commissioner of Intelligence, Rashmi Shukla, had came to know about a similar activity and sought proper permissions from then ACS (additional Chief Secretary), Home, and intercepted phone calls of several police officials and politicians,” the BJP leader said

He said Shukla then submitted the reporter to her Director General (of police) who sent it to Sitaram Kunte, then ACS, Home, on August 26, 2020.

“The conversation in the 6.3 GB data is all about home and police department alone. All the officials whose phone calls were recorded got the posts they lobbied for. This proves that calls intercepted by Shukla had important details,” Fadnavis claimed.

“The way this government is functioning, it is leading us to a chaotic state,” he said.

Hitting back, NCP spokesperson and state minister Nawab Malik rejected Fadnavis” claims terming them as “another attempt to bring down the MVA government”.

“The BJP cannot live without power. But they will not able to topple this government like in Madhya Pradesh, Karnataka and some other states. BJP”s state leadership is thus seeking the Centre”s help to malign the image of the MVA government and to bring it down,” he said.

Malik accused Fadnavis of “lying and misguiding” people over the contents of Shukla”s report.

“The MVA government enjoys satisfactory majority in the Assembly. Nobody can destabilise it,” he said.

To a query on the “6.3 GB data” which Fadnavis claimed to be in possession, Malik said, “The BJP seems to be more concerned about data than ”aata” (food for poor). This information given by Fadnavis is a part of larger conspiracy. He has been now exposed completely”.

Malik said no senior police officer is transferred without the approval of the Police Establishment Board.

“One person”s whim does not work here. Let Fadnavis share the data with anyone. It has been illegally collected by Rashmi Shukla, and if Fadnavis shares it with anyone, he would invite a legal action. I dare him to make the data public,” he said.

Malik alleged that Shukla was acting as an agent of the BJP.

“She prepared the call records illegally hence she was transferred as a punishment,” said the minister..