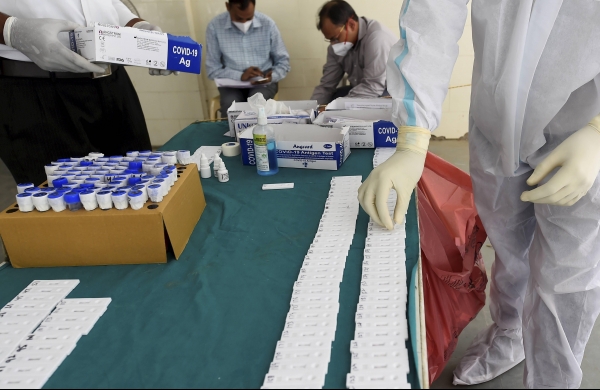 By PTI
CHANDIGARH: Haryana on Monday recorded the highest single-day rise in its COVID-19 death toll with 75 more people succumbing to the disease as well as 11,504 fresh cases, which pushed the tally to 4,35,823.

According to the health department’s daily bulletin, the latest deaths included nine from Hisar, seven each from Gurgaon and Sirsa and six each from Faridabad, Sonipat and Fatehabad districts.

On April 25, Haryana had recorded 64 fatalities.

Meanwhile, the Haryana government has demanded about 20,000 remdesivir injections from the central government for providing timely treatment to COVID patients.

According to an official statement here on Monday, out of these 20,000 injections, about 10,000 will be made available in private hospitals.

To prevent any black-marketing or hoarding of these injections, the state government is taking concrete steps and seeking a daily report on the consumption and availability of this drug in the market, it said.

Health Minister Anil Vij said that the Haryana government has placed an order for 40 lakh Oxford-AstraZeneca COVID-19 vaccine Covishield, manufactured by the Serum Institute of India, and 26 lakh for Bharat Biotech’s Covaxin.

The Centre recently allowed the country’s large 18-plus population to get inoculated from May 1.

Chief Minister Manohar Lal Khattar on Monday asserted that there is no shortage of medical oxygen in the state while assuring people that the state government was geared up to ensure people do not face any problem amid the raging coronavirus pandemic.

Khattar visited Panipat, Rohtak, Hisar and Faridabad to take stock of the situation amid a surge in the number of virus cases.

The Chief Minister, who was responding to questions posed by reporters during a visit to Panipat, ruled out any shortage of medical oxygen in the state.

“There is no oxygen shortage neither in Hisar or at any other place,” said Khattar whose response came when his attention was drawn to some deaths in three private hospitals in Rewari, Gurugram and Hisar allegedly due to oxygen shortage.

He, however, said that magisterial probe has been ordered in these incidents.

Notably, the kin of most of the patients who died in the incident had levelled allegations of oxygen shortage.

In another development with Haryana facing increased demand of medical oxygen, Home and Health Minister Anil Vij said, “Installation of oxygen generation plant by all hospitals in the state has been made mandatory”.

While Khattar asserted there was no shortage of oxygen, Vij in his tweets, however, pointed to shortage of empty oxygen cylinders in hospitals.

Vij, under whose chairmanship the state government on Monday formed a sub-committee to monitor the COVID situation, said to overcome shortage of oxygen cylinders, “all factory owners in Haryana have been directed to deposit all cylinders they have with the respective deputy commissioners as there is a great shortage of cylinders in hospitals”.

Vij also requested to Indian Medical Association to come forward and lend a helping hand amid the COVID situation.

“We want to create extra coronavirus hospitals at places of need. For that we are in need of more doctors. Please come forward,” he tweeted while referring to the IMA.

With Haryana seeing an influx of patients from Delhi and elsewhere in the wake of the sharp rise in cases, CM Khattar while responding to a question said, “We will treat them irrespective of wherever they may be from”.

The Chief Minister also visited the site in Panipat and Hisar where a 500-bed dedicated COVID hospital each is to be set up.

Speaking in Rohtak after taking stock of essential health services for COVID-19 patients at PGIMS-Rohtak, Khattar said no coronavirus patient will be allowed to suffer due to lack of medical oxygen.

The Chief Minister said Haryana’s daily quota for medical oxygen has been increased to 200 metric tonnes (MT) which was earlier fixed at 162 MT by the Centre.

The central government has been requested for 240 MT of oxygen, he said, as per an official statement.

Khattar said industrialist Naveen Jindal, who is a former MP, has also said that he will send 5 MT of liquid oxygen and people will not be allowed to suffer from a lack of the life-saving gas.

In view of the raging COVID-19 pandemic, he said 650 additional beds are being arranged at PGIMS-Rohtak, whereas earlier 350 beds are already available for COVID-19 patients.

He also said 1,250 additional beds are being arranged in different medical colleges of the state and space has already been identified for setting up 500 such beds.

Health Minister Vij, said that amid the ongoing COVID-19 situation, 20 vehicles each would be deployed in all the districts so that these can be used as ambulances.

Vij, who also heads the state-level COVID monitoring committee and held its meeting here, said the MBBS and final-year PG students studying in medical colleges will also be deputed so that the patients do not face any problem in the hospitals.

The Health Minister said the deputy commissioners have been directed to make arrangements of additional beds in their districts.

For this, the use of vacant halls, schools, dharamshalas and the support from social organisations can be taken, he said.

Meanwhile, Khattar, who also visited Faridabad, said no stone would be left unturned to ensure uninterrupted supply of oxygen.

At Atal Bihari Vajpayee Medical College in Faridabad where Khattar reviewed arrangements, an additional bed capacity of 100 for COVID patients was being created and the facility would be run with the help of Army’s Western Command.

In Hisar, Khattar directed the officers concerned to explore the possibilities of setting up a 500-bed hospital in the premises of O P Jindal Modern School.

In Panipat district, the 500-bed hospital would be set up in the premises of the Indian Oil Corporation Refinery, the statement said.

Chief Secretary Vijai Vardhan on Monday directed all deputy commissioners to identify two to three banquets or wedding halls in their respective districts so that they can be used in case of emergency.

He also directed the deputy commissioners to set up a ‘Quick-Response Team’ and appoint a nodal officer over five to six small hospitals in their respective districts.

The chief secretary was presiding over a meeting of the state-level Crisis Coordination Committee here, an official statement said.

The deputy commissioners and superintendents of police of all the districts attended the meeting through video conferencing.

Chief Minister Manohar Lal Khattar, who presided over another meeting of the state-level monitoring committee set up in view of the present COVID situation, directed the officers concerned to purchase additional oxygen tankers and set up an oxygen concentrator system as per requirement.

Khattar said use of oxygen beds should also be rationalised.

He said strict action will be taken against hospitals not complying with the norms prescribed for COVID-19.

The chief minister said the Health Department should keep a close vigil on the hospitals across the state and should also take steps to micromanage the situation.

He sought information about the district-wise allocation of oxygen and its proper supply.

Increasing the stock of oxygen supply, speeding up the construction of dedicated COVID hospitals at new locations, purchase of oxygen concentrators were some of the major issues that were discussed in detail during the meeting, the statement said.

The chief minister said despite the improvement in the health condition of patients, many are not being discharged from the hospital because of low oxygen levels.

For this, the implementation of an oxygen concentrator system would certainly prove to be beneficial, Khattar said.

He also directed the Health Department to adopt the necessary procedure for purchasing the concentrators and work out modalities in this regard.

These concentrators will prove to be a boon for home isolated COVID patients, he said.