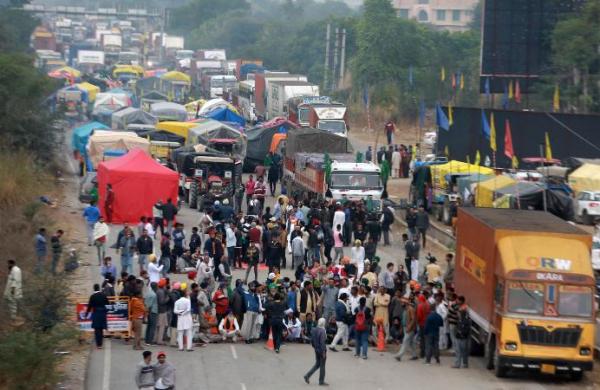 By PTI
CHANDIGARH: The Haryana government on Sunday further extended the suspension of mobile internet services in 14 districts till 5 pm on February 1 to “prevent any disturbance of peace and public order” amid a protest by farmers against three farm laws.

According to an official statement issued here, the government has extended the suspension of mobile internet services in districts of Ambala, Kurukshetra, Karnal, Kaithal, Panipat, Hisar, Jind, Rohtak, Bhiwani, Sirsa, Fatehabad, Charkhi Dadri, Sonipat and Jhajjar till 5 pm on February 1.

In the fresh order issued by the Home Department, the suspension has not been extended in Yamunanagar, Palwal and Rewari districts, where the mobile internet services were suspended earlier. “The Haryana government has extended the suspension of mobile internet services (2G/3G/4G/CDMA/GPRS), SMS services (only bulk SMS) and all dongle services, etc. provided on mobile networks except the voice calls in the territorial jurisdiction of the 14 districts,” the statement said.

“This order has been issued to prevent any disturbance of peace and public order in the jurisdiction of these districts of Haryana. Any person who will be found guilty of violation of aforesaid order will be liable for legal action under relevant provisions,” it added.

Referring to the criticism of the Congress party which said that suspension of the mobile internet services would also affect the students, Khattar said his government had made all arrangements during the COVID-19 pandemic also to ensure that studies of students were not disrupted.

Hitting out at the Congress, he alleged that the party has contributed towards the situation which has built up after January 26 incidents. Khattar said that the issue can be resolved through dialogue and added the prime minister has said that doors are always open for talks.

Congress general secretary Randeep Singh Surjewala had claimed that the internet ban was ordered “with the intention to crush the farmers” agitation” and demanded its immediate resumption. He had said the decision would affect professionals working from home due to the coronavirus pandemic, students, traders and shopkeepers and cause inconvenience to the common people.

The state government on Tuesday had ordered suspension of mobile internet services in Sonipat, Jhajjar and Palwal districts after a violent farmers’ protest rocked Delhi. On Friday, it extended the suspension to 14 other districts.

There are a total of 22 districts in the state. Thousands of protesting farmers had clashed with the police during the tractor rally in Delhi called by farmer unions on January 26 to highlight their demand for the repeal of the Centre’s three farm laws.

Many of the protesters, driving tractors, reached the Red Fort and entered the monument. Some protesters even hoisted religious flags on its domes and the flagstaff at the ramparts.