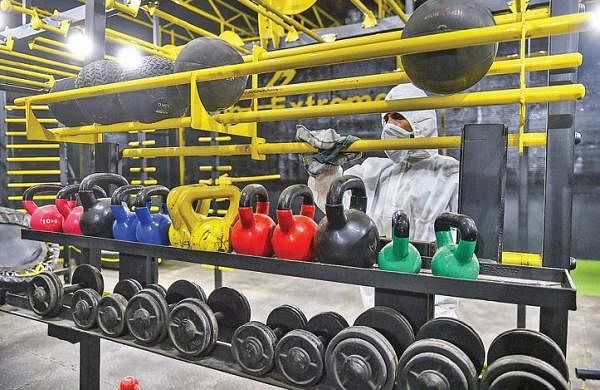 CHANDIGARH: The Haryana government on Tuesday extended Covid restrictions in the state till January 28, but allowed gyms and spas to operate with 50 per cent capacity while liquor vends can now open till 10 pm.

Initially, various restrictions imposed by the January 5 order in “Group A” districts, which had witnessed a big spike in cases, were imposed in all districts, the Haryana State Disaster Management Authority (HSDMA) had said in an earlier order issued on January 13.

Now, the guidelines released through orders on January 5, 10 and 13 will continue as before with modification of allowing gyms and spas to now operate with 50 per cent capacity utilisation while liquor vends will be allowed to open till 10 pm as against 6 pm earlier, as per the HSDMA order.

Earlier on January 10, the Haryana government had banned large gatherings of people such as rallies and protests and extended existing restrictions including the closure of cinema halls and sports complexes to eight more districts.

The order issued by the HSDMA on January 13 had said the restrictions will be applicable till 5 am on January 19, which have now been extended to January 28 (5 am).

Later, these restrictions were extended to all 22 districts in the state.

Cinema halls, theatres and multiplexes shall remain closed, the earlier order issued on January 5 had stated.

“Hence, restrictions imposed in Group A districts (other 11 districts) vide order dated January 5, shall also be imposed in these (eight districts),” said the earlier order.

As per earlier guidelines, the malls and markets are allowed to open till 6 pm.

However, shops selling essential items like milk and medicine will be allowed to open at all times to enable them to serve the public at large.

All sports complexes, swimming pools, gyms and stadia shall remain closed except when being used for training of sportspersons for participation in national and international events, the earlier order had said.

All entertainment parks and B2B exhibitions are prohibited, it had said.

The government and private offices, except for emergency/essential services, have been advised to function with 50 per cent staff attendance.

Haryana has witnessed a huge spike in Covid cases over the past three weeks.

To check the spread of the viral infection, the state government has banned people eligible for vaccination but not fully vaccinated from entering shopping malls, cinema halls, restaurants and grain markets, among other crowded places, starting January 1.

A night curfew from 11 pm to 5 am is already in force in the state.

Eight more people died from coronavirus in Haryana on Tuesday as 8,388 fresh cases surfaced, pushing the state’s infection count to 8,64,490, according to a Health Department bulletin.

So far, 10,124 people have died from the infection in the state.

While two fatalities were reported from Yamunanagar district, Hisar, Sonipat, Karnal, Panipat, Ambala and Kurukshetra districts reported a fatality each, as per the bulletin.

The recovery rate was 92.20 per cent, the bulletin said, while the cumulative recoveries so far after the outbreak of the pandemic are 7,97,066.