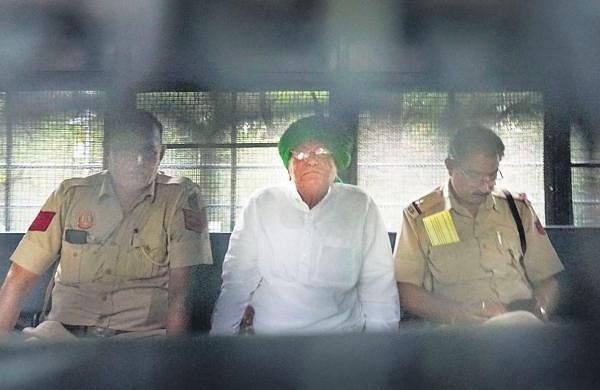 The 87-year-old Indian National Lok Dal (INLD) supremo, who in the past had served five terms as Haryana chief minister, was last week found guilty of possessing disproportionate assets in a case lodged against him by the CBI over 16 years ago.

According to a CBI statement, a case was registered against Chautala and others on the basis of allegations that as Haryana chief minister between July 1999 and March 2005, he colluded with some of his family members to accumulate both movable and immovable assets in his names and that of his family members. The CBI registered a case on April 3, 2006.

A chargesheet filed on March 26, 2010, after completion of investigations showed that the extent of disproportionate assets was more than Rs 6 crore, which was 189 percent of his income. The trial court found Chautala guilty of possessing disproportionate assets to the tune of Rs 2.81 crore (103 percent of his income) and convicted him on May 21 this year.

The case against Chautala stemmed from a Supreme Court order of Nov. 25, 2003, transferring the investigation of the JBT teacher recruitment scam to the CBI. The allegation against Chautala was that his government at the time took bribes to recruit junior basic trained (JBT) teachers by using forged documents between 1999 and 2000.

During its probe, the CBI found a “memorandum of chargesheet” against Chautala that contained details of his assets. It reflected a list of 43 movable and immovable properties, supposedly valued at `1,467 crore. The memorandum, which was the foundation of the case against Chautala, was signed by the then Haryana Chief Minister Bhupinder Singh Hooda. Subsequently, the Enforcement Directorate too invesigated  the money trail.