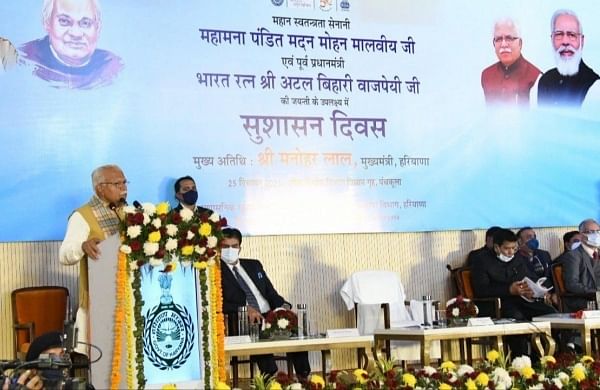 CHANDIGARH: Haryana Chief Minister Manohar Lal launched the portal of Haryana Kaushal Rozgar Nigam along with the announcement of setting up of Atal Park and Smriti Kendra in Gurugram in the programme organized on the occasion of Good Governance Day. A patrika named ‘Vyavastha Parivartan Se Susashan’ along with the official calendar of year 2022 was also launched. On this occasion, the Chief Minister also honoured 78 officers and employees for doing commendable work in various fields in the State. On the birth anniversary of former Prime Minister, Sh. Atal Bihari Vajpayee and Mahamana Madan Mohan Malaviya, the Chief Minister said that after the formation of the Government in the year 2014, Prime Minister, Sh. Narendra Modi called upon us to celebrate Good Governance Day on December 25th every year. Accordingly, moving forward in the direction of good governance, the state government has taken various bold decisions in order to strengthen and revive the system.

Now all the problems of the public are being solved easily through CM Window. So far, more than 8.5 lakh issues have been resolved. The government has abolished the practice of remand in the cases of the Revenue Department. Only a maximum of two appeals can be made in this. Apart from this, a run through system has been implemented to accelerate the file work. The government has abolished the contractual practice in the recruitments made in the departments.

13, 47,609 cards have been made in the state under the Svamitva Yojana

So far around 13.47 lakh Svamitva cards have been made under the Svamitva Yojana in the state, out of which about 3.90 lakh Svamitva cards have been distributed. In this programme, the Chief Minister handed over Svamitva cards to 5 persons on the spot under the Svamitva Yojana. Apart from this, he interacted with Bhim Singh of Dhaka Gujran village and Darshana Devi of village Rukhsana in Karnal district and Dharam Singh of Shahpur Khurd village and Sudesh Devi of Alipur village in Faridabad district and congratulated them on getting the Svamitva card. The Chief Minister said that now necessary steps will be taken to prevent drop out of children in the age group of 5 to 18 years. Work is already being initiated in this direction in district Mewat.

The Chief Minister said that the Good Governance reforms brought in by the State Government, such a systematic system has been developed under which people do not have to make frequent visits to headquarter in Chandigarh or the district offices to get their work done. They can take advantage of all the government schemes at nearest Community Service Centre (CSC) in their village or online while sitting at their homes only.

The Chief Minister said that the Parivar Pehchan Patra would be a strong document in moving towards the direction of good governance in the state, due to which it would be easy to fetch the benefits of the welfare services automatically. With this robust system now under the Old Age Samman Allowance, the pension of the beneficiary will start automatically. Now elderly people need not to apply anywhere as the pension automatically starts when one attains the age of 60. In the villages of the state, the work of generating the property cards under the Swamitva Yojana has been started by abolishing the old system of Lal Dora. Under this scheme, so far 13 lakh 47 thousand 609 people have Swamitva cards in the state.

He said that Antyodaya Parivar Utthan Yojana has been started to bring the poorest of the poor into the mainstream. By strengthening the online system, the government started giving direct benefits to the beneficiaries under the DBT scheme. The government has created an online transfer policy and started giving jobs on the basis of merit to ensure complete transparency. These services were brought under the purview of the Right to Service Act to make the benefits of government services reach the public in a time bound manner. Now the accountability of the department and the officer has been fixed for not giving the benefit of the service on time. The Government started the Dial-112 scheme, due to which people are getting police help in just 15 minutes. Now, for the convenience of hearing and speaking people with disabilities, sign language experts will sit in dial-112 through video call and the police will help them after listening to their problems.

The Chief Minister said that under the pilot project, the process of arms license is being made online in two districts of Rohtak and Panchkula. From January-2022, under the PDS scheme, ration will be started from the family identity card itself and the name of the beneficiary will be automatically added and removed on birth or death under this scheme. Similarly, CLU has been made online in the state. The work of e-Bhoomi and Web-Halris portal are also in progress. The e-registration system has already been made. The powers of the urban local body have been expanded and strengthened. Educated Panchayats are being formed in the state. E-auction system has been made in the mandis. Mining contracts are being awarded through e-auction. If the people of the society want to come forward to help the government as a volunteer for the purpose of public service, then they can register on the Samarpan portal. So far 90 thousand people have applied on this portal. The government has made sure to make good use of water by making a water management plan. Gram Darshan Portal has been started for the demand related to the development of the village. The demand registered on this will be fulfilled by the recommendation of the public representatives elected by the public. Apart from this, a run through system is being implemented to speed up the files.

He said that the State Government is preparing development plans for Haryana keeping in view the Vision-2047. Many initiatives are being run in the state under the occasion of Amrit Mahotsav celebration. The state government has so far received about 150 awards for technology use. The Prime Minister has also praised the work being done in Haryana and the use of technology, which is a matter of pride for the people of the state. During the event Haryana Vidhan Sabha Speaker, Sh. Gianchand Gupta, Chief Secretary, Sh. Sanjeev Kaushal, Chief Principal Secretary to Chief Minister, Sh. D.S. Dhesi, ACS, Sh. PK Das, Commissioner Administrative Reforms Department Sh. Pankaj Agrawal, Additional Principal Secretary, Dr. Amit Agrawal and other senior officers were present.

Manohar Lal made several announcements at the state level Good Governance Day programme.  He said that the year 2022 would be celebrated as the year of good governance, Antyodaya Utthan.  Similarly, the emergency response system Dial-112 will be made accessible to deaf and mute persons.  Police assistance will be provided to them immediately after understanding their problem through a sign language expert through video calling.

The Chief Minister said that online application process would be started in Rohtak and Panchkula for getting arms license under pilot project, in which the work of police verification would be brought under the purview of Right to Service Act.  After successful implementation of this project, the process of arms license will be online in all the districts at the state level.  Arms licenses will be issued for security and not for prestige.

He said that the Public Distribution System has been linked with the Parivar Pehchan Patra.  Now from January-2022, there will be no need to carry ration cards to ration depots, but it will be possible to get ration only from Parivar Pehchan Patra cards.  The account of addition or reduction of the number of family members will also be done through the parivar pehchan patra cards.

(This press release was issued by the Haryana government.)