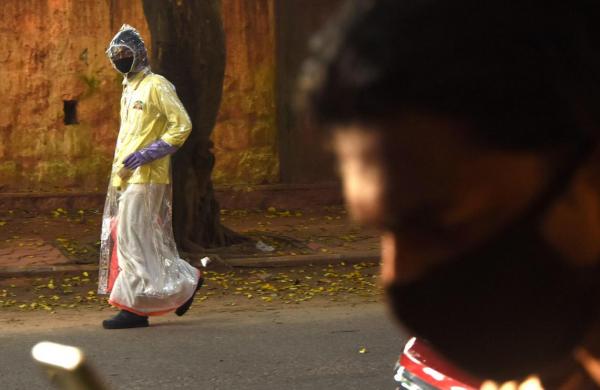 By Express News Service
MUMBAI/NEW DELHI/CHENNAI: With the fresh Covid case count continuing to climb in Maharashtra, a worried Chief Minister Uddhav Thackeray on Thursday announced total lockdown in some districts of North Maharashtra and Vidarbha, including Nagpur.

Stricter measures will be taken if the situation does not improve, he said.

Senior officials at the Centre shared his concern, as Maharashtra is witnessing the most intense second wave of infections.

“This is a serious matter. It has two lessons — don’t take the virus for granted; and if we have to remain Covid free, then, we need to follow Covid appropriate behaviour, containment strategy and vaccination,” Paul said.

“We are very worried about the rise in cases across several districts in Maharashtra. We have two lessons for us. Don’t take this virus for granted. It can come up unexpectedly.”

“Secondly, if we have to remain free of this virus, it is very important COVID-appropriate behaviour, containment strategy, readiness from the health infrastructure point of view as well as vaccination has to be brought in to fight the pandemic,” Paul said.

Sounding a word of caution for Delhi and its neighbourhood, Paul said the national capital is seeing a rise in positivity rate, and so is Gurgaon, Faridabad and to an extent Gautam Buddh Nagar and Ghaziabad.

“Be careful, be watchful. We still have a huge population at risk of this virus. This pandemic is not yet over. Be vigilant,” he said.

“Today, using the force of vaccination, we are in a position to give a stronger fight (to the pandemic). We plead again, do not lower your guard and please embrace the vaccines that are available,” Paul added.

He advised that in districts where COVID-19 cases are seemingly on the rise, vaccination of eligible individuals should be intensified and prioritised.

ICMR director general Balram Bhargava, while ruling out the role of mutant virus in the surge in the cases, put the blame on slackness on the part of the administration and the people.

Rajesh Bhushan pointed out that while the active Covid-19 cases have almost halved in Kerala, they have more than doubled in Maharashtra.

“We need to appreciate this,” he said.

In West Bengal, active cases have come down from 4,300 to 3,127, the Union health secretary said.

However, in the case of Maharashtra, there were 36,917 active cases on February 11 and now it has crossed a lakh.

“We think Gujarat, Madhya Pradesh and Haryana are at a tipping point. They are yet to have a surge. But looking at early signs of an increase in numbers, we have had three meetings where the states have been told to increase the number of tests, surveillance, containment areas,” he said.

According to the health ministry, a total of 2,60,73,517 vaccine doses have been given, as per the provisional report till Thursday 7 pm.

These also include 10,21,588 beneficiaries aged 45 years and above with specific comorbidities and 59,98,754 beneficiaries who are aged over 60 years.

In response to a question on whether the government has a timeline in mind for phase three and who gets included in that, Paul said, “We are now focused on the relatively large group of individuals above the age of 60 as well as those aged between 45- 60 years with comorbidities. We are building a momentum to cover this significantly large group.”

“We will see progress and moving forward, yes, further increase in the circle of those who are eligible will be considered,” he said.

In response to a question on the Rajasthan government recently claiming a shortage in the COVID-19 vaccine stock, Bhushan clarified that there is no shortage of COVID-19 vaccines in any state in the country so far.

The central government regularly monitors the availability of vaccine supply in all states and UTs and their consumption on a daily basis.

After taking his first jab at J J Hospital in Mumbai, Thackeray sought to dispel apprehension in people’s minds, saying it has no after-effects. “Since the vaccine is available now, everyone should take it. Equally important is the need to wear a mask, wash hands from time to time and maintaining social distance,” Thackeray said.

Tamil Nadu too ramped up its measures to contain the new wave, by deciding to post flying squads at all public places, including railway stations, to enforce Covid-appropriate discipline.

The state recorded 14,317 new cases on Thursday, the highest one-day spike this year. The active casetally stood at 1,06,070, thrice the number in Kerala, which came second with 33,785. As many as 57deaths were reported, three more than Wednesday.

Several restrictions will come into force in Nanded district from March 12 with the intention of curbing the spread of coronavirus infection, officials said.

Collector Vipin Itankar issued an order to this effect on Thursday.

As per the order, shops will be operational from 7 am to 7 pm only.

No weekly markets will be allowed in the district between March 12 and 21 and coaching classes shall remain closed during this period.

Hotels shall function from 7 am to 8 pm at 50 per cent of their seating capacity.

Gyms, playgrounds and swimming pools will remain functional for practice, but competitions are not allowed to be held there between March 12 and 21, it said.

Social, religious and political programmes will not be allowed to be held during this period, the order said.

Top officials in Aurangabad district took to the roads on Thursday and appealed people to wear masks amid rising coronavirus cases.

A partial lockdown has begun in the district.

They also visited shops and hotels to see if COVID-19 norms were being followed.

Masks were given to auto rickshaw drivers while fine was imposed on some shop owners.

Four deaths and 530 new cases were reported on Thursday. The active case tally stood at 4,094. No fresh case was reported in nine of the total 52 districts in the state during the day.

The State reported 685 fresh cases and five deaths on Thursday, taking the case tally to 8,57,602 and the death toll to 12,535.
Preventive measures have been strengthened, with flying squads mounting vigil. The Nilgiris has warned of six-month jail to those not wearing masks; 12,06,164 people have been vaccinated so far. Recoveries remained comparatively less with 543 people getting discharged, taking the cumulative number to 8,40,723 leaving 4,344 active cases, a department bulletin said.

With rise in new cases, the health department said on the lines of a flying squad involved in poll related work, the government was planning for one that who would check whether people who visit popular places adhere to COVID-19 norms such as wearing masks and maintaining social distance.

Chennai accounted for the bulk of new infections with 292 cases, aggregating to 2,38,007 till date.

The metropolis also leads in the number of fatalities with 4,174.

Testing of samples which was around 50,000 a day, increased to 65,945 on Thursday, taking the total specimens examined to 1.80 crore so far.

As many as 25 districts reported fresh infections in single digits, while Coimbatore logged 52 cases, Chengalpet 51, Thiruvallur 49.

Among those who tested positive today include seven returnees from the United Arab Emirates, West Bengal and Uttar Pradesh, the bulletin said.

Meanwhile, state Health Secretary J Radhakrishnan, who has been taking up surprise inspections to check whether people conform to standard operating procedures inspected at the Chennai Central Railway Station and directed officials to collect spot fines from those people who were not seen wearing a mask.

Speaking to reporters, he said the government was planning to depute a flying squad, similar to the one engaged in poll related work, to check whether people follow the SOP in order to prevent the spread of virus.

Earlier, there was formation of “function based (COVID- 19) clusters” in Tamil Nadu. Now, the spread of the virus, has been more in places like housing societies, private functions, he noted.

Another mistake people commit is by not notifying the corporation staff if they test positive for the virus, the senior health official said.

Second, even after undergoing test at a private lab, people prefer home quarantine. But, already eight people would have contracted the contagion from that individual.

He urged people to come forward and use government facilities as they have necessary infrastructure.

On the vaccination drive, he said the government has been receiving good response from the public and on Thursday hotel associations, auto and taxi operators assured him of taking the jab.

Reiterating his point that the rise in new cases was a ‘warning bell’, he said, “2021 will not be like last year since we have vaccination this year.

“However, we should not allow the virus to spread again and then take measures to control it,” he said.

“There have been a lot of deaths in a day due to the virus (last year), but today five deaths have been reported (due to COVID-19). If we had followed the protocols like wearing masks and maintaining social distances, we can avoid even those five deaths,” he added.