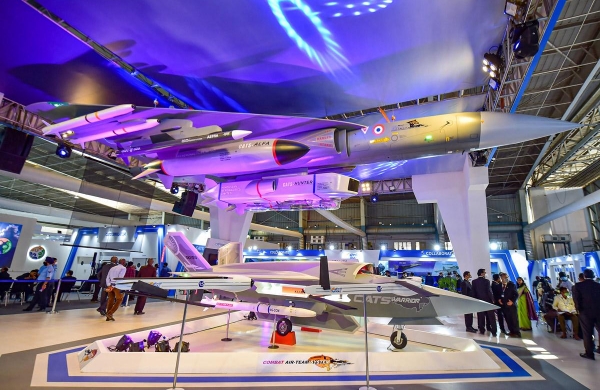 By Express News Service
BENGALURU: Hindustan Aeronautics Limited (HAL) is looking at 2024-25 to develop its unique Combat Air Teaming System (CATS) deep penetration attack system that enables a fighter pilot to remain safely within the country’s borders while being able to deploy missiles or swarms of drones deep into enemy territory to destroy targets.

The project, with an initial investment of Rs 400 crore, comprises three components that can be separately or simultaneously deployed – CATS Hunter, CATS Warrior and Alpha-S, all of which are unmanned systems but can be controlled from the mothership, which is the fighter aircraft from which it is launched by its pilot from a safe distance.

According to HAL, the CATS Hunter is being conceived as an air-launched cruise missile that has the capability of deep penetration strikes which can be released by a fighter aircraft like LCA Tejas, Jaguar or Sukhoi-30 MKI from a safe distance. CATS Warrior can take off on its own from the ground and target enemy locations carrying heavy explosives. “It can go up to 700 mm and hit a target, or can fly for 350 km, release attack drones and return to base,” said Arup Chatterjee, Director (Engineering, Research & Development), HAL.

The Warrior can also carry and release the Alpha-S, a swarm of up to 24 drones each carrying about 5-8 kg of explosives, and can target multiple enemy locations simultaneously on being released.

Alternatively, the Alpha-S can be released directly by a fighter aircraft using a glider that can carry the drone swarms deep into enemy territory, controlled by the pilot from the mothership, which is the fighter aircraft from which it was launched. Each drone in the swarm of Alpha-S are networked with other drones in the swarm via electronic data links and are also equipped with electro-optical and infrared sensors. This enables each drone to select separate targets.

Chatterjee said the CATS Warrior and Hunter can be powered by a modified PTE-7 engine of the HAL, which was the power plant of the Lakshya unmanned aircraft.

He said the ‘mothership’ (the fighter aircraft) will take around 15 months to get ready to be made compatible with CATS. “It our thought process right now that by 2024-25 we will be able to develop theCATS,” he said.

“Presently, we are investing our own funds. We are going ahead with our project and subsequently the Indian Air Force will come in,” he said.

The idea of this unique concept is to ensure maximum firepower against enemy targets while keeping the pilot and fighter aircraft safely out of enemy fire.

HAL had quietly initiated the CATS project in 2017 and also tested the project in Pokhran in Rajasthan for the Indian Air Force, senior officers of which were said to be impressed by watching the tests.

UAVs to deliver supplies to jawans in high altitude posts

Noticing the extremely difficult conditions which make helicopter flights almost impossible to carry rations to forward posts at high altitudes, HAL has come up with RUAVs to do the job instead. “We are planning to carry out the first test flight in June next year,” he said.

Also, in what Chatterjee described as the first in the world, HAL is planning to develop an unmanned flying system that can fly at about 70,000 feet continuously for two to three months to maintain surveillance on the ground below.

“This is a futuristic concept which no other country has yet developed. It will be a solar energized system. We are developing this jointly with a start-up company,” he said.