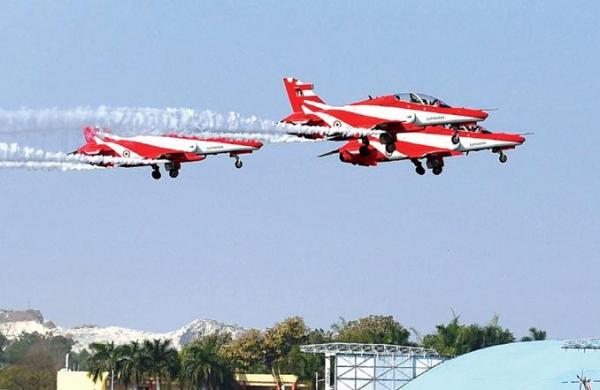 By Express News Service
BENGALURU: Hindustan Aeronautics Limited (HAL) is looking at a 2024-25 deadline to develop its unique Combat Air Teaming System (CATS), a deep penetration attack system that enables a fighter pilot to remain safely within the country’s borders, while being able to deploy missiles or swarms of drones deep into enemy territory to destroy targets.

The project, with an initial investment of Rs 400 crore, comprises three components that can be separately or simultaneously deployed – CATS Hunter, CATS Warrior and Alpha-S — all of which are unmanned systems, but which can be controlled from the ‘mothership’, the fighter aircraft from which it is launched by its pilot from a safe distance. This unique concept will ensure maximum firepower against enemy targets, while keeping the pilot and fighter aircraft out of enemy fire.

The CATS Hunter is being conceived as an air-launched cruise missile that has the capability of deep penetration strikes which can be released by a fighter aircraft like LCA Tejas, Jaguar or Sukhoi-30 MKI. CATS Warrior can take off on its own from the ground and target enemy locations carrying heavy explosives. “It can go up to 700km and hit a target, or fly 350km, release attack drones and return to base,” said Arup Chatterjee, Director (Engineering, Research & Development), HAL.

The Warrior can also carry and release the Alpha-S, a swarm of up to 24 drones each carrying about 5-8kg of explosives, and can target multiple enemy locations simultaneously on being released. Alternatively, the Alpha-S can be released directly by a fighter aircraft using a glider that can carry the drone swarms deep into enemy territory, controlled by the pilot from the mothership. The drones in the swarm of Alpha-S are networked via electronic data links, and equipped with electro-optical and infrared sensors. This enables each drone to select separate targets.

The CATS Warrior and Hunter can be powered by a modified PTE-7 engine of the HAL, which was the power plant of the Lakshya unmanned aircraft. He said it will take around 15 months for the mothership to be made compatible with CATS.

“We should be able to develop the CATS by 2024-25,” he said. “We are investing our own funds and going ahead with the project, and subsequently the Indian Air Force will come in.” HAL had quietly initiated the CATS project in 2017, and also tested the project in Pokhran  for the IAF, and its capability had left senior officers impressed.

Rotary Unmanned Aerial Vehicles (RUAVs) are being developed and tested to deliver rations and supplies to soldiers posted at high altitude border posts, Chatterjee said. With extremely difficult conditions making helicopter flights almost impossible to carry rations to forward posts, HAL has come up with RUAVs to do the job instead.

SHOOTER SATELLITE UAVHAL is planning to develop an unmanned flying system that can fly at about 70,000ft continuously for 2-3 months, to maintain surveillance on the ground below. Arup Chatterjee, Director (Engineering, Research & Development), HAL, described it as the first in the world. “This is a futuristic concept which no other country has yet developed. It will be a solar energised system. We are developing this jointly with a startup,” he said.

IAF proposal for basic trainer HTT40HAL has received a Request for Proposal (RFP) and quotation from the IAF for its basic trainers requirement, at Aero India 2021 on Thursday. The documents were handed over to HAL CMD R Madhavan, by Deputy Chief of Air Staff Air Marshal Sandeep Singh, and Director General (Acquisition), Ministry of Defence, VL Kantha Rao. The RFP is for 70 HTT40 aircraft, with an additional clause for 38 more. Production will take place at HAL’s two manufacturing units in Bengaluru and Nashik. The RFP has come within six years of HAL’s first flight, which is claimed to be the shortest timeline in the aircraft industry. The trainer will have more than 60% indigenous content.

MoUs with MIDHANI, GE Aviation signedHAL on Thursday signed an MoU with MIDHANI (Mishra Dhatu Nigam Limited) at the ongoing Aero India 2021 for development and production of composite raw materials. Composites raw materials, mainly in the form of Prepregs used in platforms like LCA, ALH, LCH and LUH are currently imported. HAL also signed a contract with GE Aviation for development and supply of ring forgings for GE Aviation military and commercial engine programmes. The 5-year contract valued over `100 crore involves supplying both steel and nickel alloy forgings for shrouds, cases, rings and seals. The forgings will be manufactured at HAL’s new facility at its Foundry and Forge Division in Bengaluru.