Haj House vs Amar Jawan Jyoti: Samajwadi Party, BJP attack each other ahead of UP polls 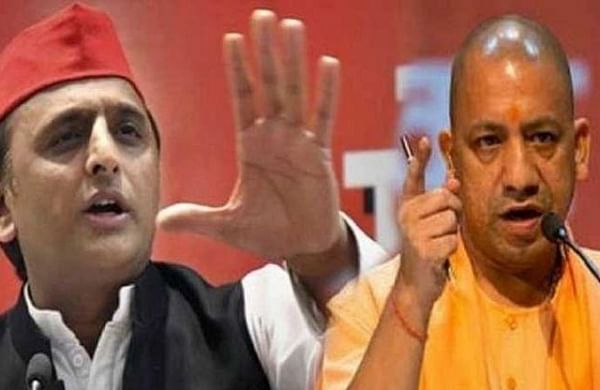 GHAZIABAD: Uttar Pradesh Chief Minister Yogi Adityanath on Sunday took part in a door-to-door campaign in Ghaziabad and launched a scathing attack on the Samajwadi Party, saying while a Haj House was built here earlier, his government constructed the Kailash Mansarovar Bhawan.

During the day, Adityanath addressed his party workers in Krishna Dental College of Sahibabad and in Saraswati Shishu Mandir in Nehru Nagar, besides the door-to-door campaign in Rajiv Colony of Sahibabad.

“Earlier Haj House was made in Ghaziabad. Our government constructed Kailash Mansarovar Bhawan. Earlier the mafia used to harass traders, but now no mafia can dare to grab property of any trader, doctor or a poor person,” he said.

“In the past, ration meant for the poor did not reach them and it would go to Bangladesh through the food grains mafia. But today food grains are reaching the poor and 15 crore people have got it. The ‘double engine’ government is making available a double dose of food grains,” he said, referring to the BJP-led dispensations in the state and at the Centre.

Adityanath also targeted the Samajwadi Party over its promise of providing 300 units of electricity free to domestic consumers, saying that during its rule there was no electricity supply.

He said the SP was making many promises, knowing well that it would not win the elections.

“We distributed tablets to the youth and they are saying that they will also give smart phones. They know that they are not going to come to power, hence they are promising anything and everything,” Adityanath said.

He also targeted SP president Akhilesh Yadav over the pension scheme for the elderly.

Targeting his opponents over the law and order situation, he said, “There was no coronavirus during SP-BSP governments, but curfew was definitely imposed. There is corona in our time, but there is no curfew. Public life is normal. What was the situation in western Uttar Pradesh before 2017? There was an atmosphere of fear everywhere. At some places, there used to be curfew-like atmosphere in evening.”

Assembly polls in Uttar Pradesh will be held in seven phases between February 10 and March 7, and the results will be declared on March 10.

Ghaziabad district will vote in the first phase.

Samajwadi Party chief Akhilesh Yadav on Sunday urged the people to light a flame on the Republic Day in the “memory of Amar Jawan Jyoti”, days after its merger with the eternal flame at the National War Memorial.

In a tweet in Hindi, Akhilesh Yadav said, “In the memory of ‘Amar Jawan Jyoti’, this time on January 26, let us all light a flame at our own level and together raise one voice of one country. (We) will take a pledge on January 26, and will light the Amar Jawan Jyoti once again. Those whose names are not registered in the country’s history, they want to change the history.”

In a short ceremony on Friday afternoon, a part of the Amar Jawan Jyoti flame at the India Gate was taken and merged with the eternal flame at the National War Memorial (NWM) 400 metres away.

Prime Minister Narendra Modi had on February 25, 2019, inaugurated the NWM, where names of 25,942 soldiers have been inscribed in golden letters on granite tablets.

After India defeated Pakistan in the 1971 war, the Amar Jawan Jyoti was constructed as a memorial to Indian soldiers who made the supreme sacrifice.

It was inaugurated by the then prime minister Indira Gandhi, on January 26, 1972.

Union minister and BJP leader Anurag Thakur on Sunday targeted the Samajwadi Party over its promise of providing 300 units of electricity free to domestic consumers, saying under the party-led government power cables were used to hang clothes to dry.

The Union Information and Broadcasting Minister took part in a party campaign in Hazratganj area of the state capital.

“Getting electricity for 300 hours a month was difficult in his regime, but now he is talking about giving 300 units of free electricity. This raises doubts,” he said, targeting SP president Akhilesh Yadav.

Power cables were used to hang clothes during the previous SP regime, he said.

He alleged that the SP chief would again blame the electronic voting machines when the poll results are declared.

He said the SP has fielded people with criminal records in this election.

Some of the SP candidates are in jail and some others are out on bail, he added.

“Under the SP government, women felt insecure. But in the five years of the government of Yogi Adityanath, the safety of women has been given top priority. This is the reason Aparna Yadav (of SP), Aditi Singh and Priyanka Maurya (both from the Congress) joined the BJP. The women of the state feel secure in the BJP,” Thakur said.

“The opposition is making continuous efforts to instigate the public by banking on caste equations and trivial politics. In making such efforts, they were unsuccessful in 2017 and the people are going to reject the Samajwadi Party completely in 2022,” he said.

Thakur said, “Their (SP) IT cell means ‘Income from Terror’. It has criminals like Atiq (Ahmed) and Nahid Hasan. It was because of them that industrialists, traders and the common people had to undertake an exodus from the state.”

Assembly polls in Uttar Pradesh will be held in seven phases between February 10 and March 7, and the results will be declared on March 10.