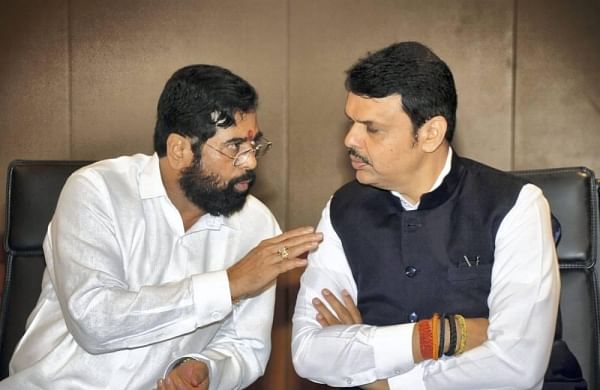 “People used to think that BJP is eager for power, it is doing this for the post of CM, but despite having 106 MLAs, we made Eknath Shinde the CM. It’s my responsibility to ensure that Eknath Shinde is a successful CM,” Fadnavis said at a Press Conference.

Fadnavis said he took the Deputy CM post after a discussion was held with Prime Minister Narendra Modi and BJP president JP Nadda as well as Union home minister Amit Shah. “The order of the party’s seniors was paramount to me and the BJP leadership believed that he should be part of the government,” he added.

“One person has polluted the politics of Maharashtra and put state politics’ culture into a ditch, you know who that person is. He should self-respect,” he added.

Putting rest to news reports claiming that Fadnavis is unhappy knowing Shinde being the Chief Minister of the State, Fadnavis today, while addressing a press conference said, “Had I requested, I could have become the Chief Minister. We made Shiv Sena’s representative as a Chief Minister for ideology…It was my proposal to make Shinde the CM.”

“Senior party leaders insisted that government won’t run if I stayed out of it, so I accepted the Deputy Chief Ministerial post on their command,” said Fadnavis.

Maharashtra chief minister Eknath Shinde on Monday won the floor test in the state Assembly on the last day of the two-day special session of the House. In the 288-member House, 164 MLAs voted for the motion of confidence, while 99 voted against it. Three legislators abstained from voting, while Congress’s Ashok Chavan and Vijay Wadettiwar were among those absent during the trust vote.

Rahul Narvekar of the BJP was on Sunday elected Speaker of the Maharashtra Assembly during the first day of its special session.

The Speaker’s post was lying vacant since February last year after Nana Patole of the Congress resigned.

Narvekar (45) is the youngest ever Assembly Speaker in the country, Deputy Chief Minister Devendra Fadnavis said.

Last month, Eknath Shinde launched a rebellion against the party. The majority of MLAs sided with him, which led to the collapse of the MVA government led by Uddhav Thackeray.

Eknath Shinde was on Thursday sworn in as the 20th chief minister of Maharashtra, while BJP stalwart Devendra Fadnavis took oath as the deputy CM.