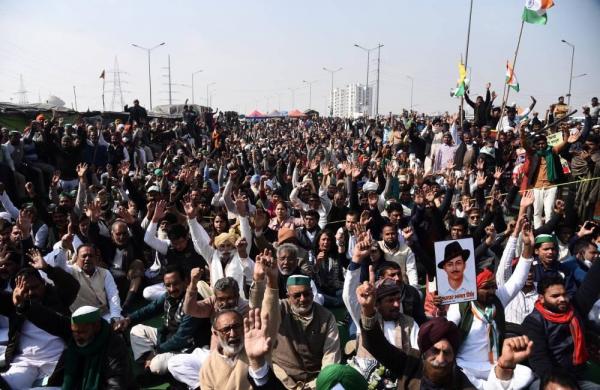 By PTI
GHAZIABAD: Prominent Gurjar leader of western Uttar Pradesh Madan Bhaiyya on Saturday extended his community’s support to the Bharatiya Kisan Union in its ongoing protest against the central farm laws.

Without naming him, Madan Bhaiyya also hit out at BJP’s Loni MLA Nand Kishor Gurjar, who has been accused by farmers of orchestrating violence at the Ghazipur protest site on January 26, saying he indulged in “anti-farmer acts”.

Nand Kishor, however, has denied the allegations.

Madan Bhaiyya said the farmers at Delhi’s borders have been protesting for two months now and braving the cold to highlight their demand for the rollback of the new laws and their movement is non-political and peaceful.

He also lauded BKU leader Rakesh Tikait and his supporters for infusing new energy into the movement.

Madan Bhaiyya extended the support of the Gurjar community to all protests against the new farm laws at different Delhi borders including Ghazipur, where BKU members and supporters have been camping since November 28 last year.

“I assure the Gurjar community’s support to transform your (Tikait’s) tears into a flood,” he said in a statement.

Referring to the violence on January 26, Madan Bhaiyya said, “The ruckus created by one anti-national element has embarrassed the whole country and because of this the protesting farmers felt discouraged and demotivated despite being innocent.”

“Gurjars are also identified as a farming community and in this light, it would dent the prestige of all Gurjars if any community member goes to these protests with an intention to create a ruckus,” he said.