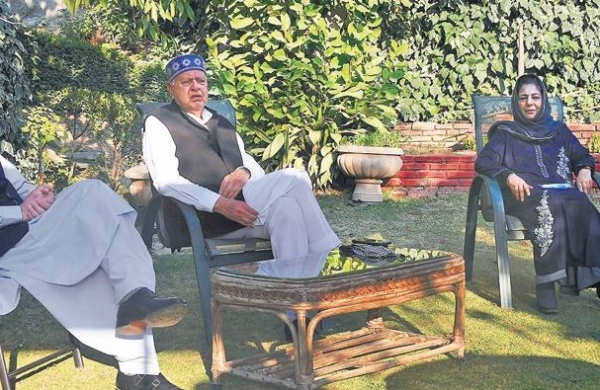 Express News Service
SRINAGAR: The six parties Gupkar Alliance, which has vowed to fight for Article 370 restoration, has gone totally silent after the conduct of first-ever District Development Council (DDC) polls in November-December 2020 in Jammu and Kashmir.

It has led to speculation that the six parties alliance, which was formed in October last year, is in disarray.

Already one of the constituents of the Gupkar Alliance – Peoples Conference – has quit the alliance after DDC polls after alleging NC and PDP of fielding proxy candidates in DDC polls held in J&K in November-December last year.

There has been no formal or informal meeting of the leaders of the Gupkar Alliance either in Srinagar or Jammu since the DDC poll result was declared on December 22, 2020.

The total silence of Gupkar Alliance has given rise to speculation that all is not well within the alliance and it is in disarray. There are reports that some sections in NC and PDP, two main parties of the Gupkar Alliance, are not comfortable with the alliance and want the parties to go solo on their respective agenda on Article 370.

However, Gupkar Alliance convenor and CPIM leader Mohammad Yousuf Tarigami said the alliance is not in disarray.

“It is a little pre-occupation of some of the constituents in their respective activities that prevented us from holding a meeting,” he said adding, “The Alliance is very much intact”.

Tarigami said he is in touch with other Gupkar Alliance leaders and they would be meeting soon.

Gupkar Alliance Coordinator and NC MP Justice (Retd) Hasnain Masoodi said the leaders could not meet as most of them were not present at the same place.

“Informally the leaders are in touch and discussing how things should go and shape up,” he said.

According to Masoodi,  Gupkar Alliance leaders would meet in the coming days to chalk out the future strategy.

“The Gupkar Alliance will be more active in the coming days. It is becoming more relevant and it has to play a big role because we represent aspirations and sentiments of people,” he claimed.

Surprisingly, even as five months have passed since the Gupkar Alliance was formed, the alliance has not come out with any roadmap on how it was going to fight for Article 370 restoration.

The alliance has not made it clear yet whether it would fight legally only for restoration of Article 370 or also take political route.