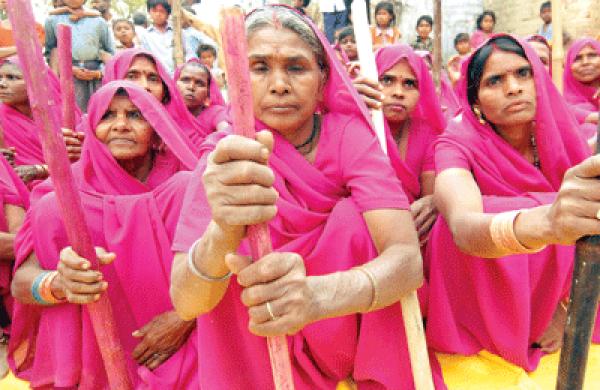 By PTI
MAHOBA: Gulabi Mahila Uthan Samiti, a faction of the Bundelkhand-based women vigilante group Gulabi Gang, has formed teams in Uttar Pradesh’s Mahoba district that will identify those committing crimes against women and hand them over to police.

The Gulabi Gang started in the state’s Banda district as a response to widespread domestic abuse and other violence against women, and was headed by Sampat Pal Devi.

Currently, it has three factions — one headed by Sampat Pal in Banda, and the others by Suman Singh Chauhan in Mahoba and Asha Nigam in Kanpur.

Chauhan, who heads the Gulabi Mahila Uthan Samiti, said the teams will try to stop crime against girls and women in the vicinity of schools, colleges, temples and markets, and at homes.

“The 60-member ‘jhapattamaar dal’ has been formed by the faction of the Gulabi Gang headed by me.

This team in Mahoba will work to catch those committing violence against girls and women, and handover them to police,” she said.

The ‘jhapattamaar dal’ will work in co-ordination with the anti-Romeo squad of the police and the Dial-112 PRV.