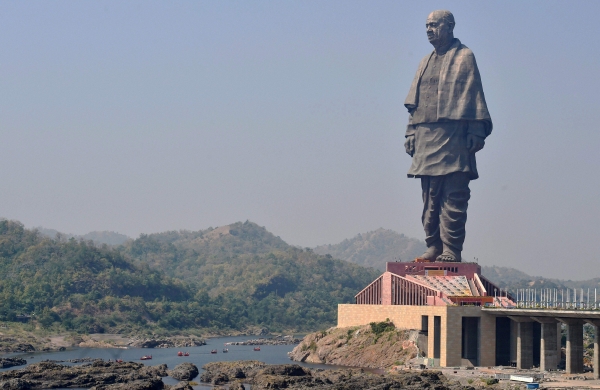 By PTI
AHMEDABAD: In a major milestone, the ‘Statue of Unity’ at Kevadia in Gujarat’s Narmada district has crossed the mark of 50 lakh visitors since its inauguration in 2018, a state government official said on Monday.

The statue has emerged as an international tourist destination, offering multiple attractions for all age groups, Gujarat’s Additional Chief Secretary (Forest and Environment) Rajiv Gupta said in a tweet.

The 182-metre tall statue of Sardar Vallabhbhai Patel, billed as the world’s tallest and built on the Sadhu Bet islet near the Sardar Sarovar Dam in Kevadia, was inaugurated by Prime Minister Narendra Modion October 31, 2018.

Since then,visitors from across the country and abroad have flocked the tourist spot and several other attractions that have been added there.

To improve rail and air connectivity to Kevadia, the government recently added eight new trains from different parts of the country and a seaplane service from Ahmedabad.

The flow of visitors to the tourist spot was affected after the outbreak of COVID-19 in 2020, but picked up rapidly since it was reopened for the public on October 17 last year after remaining closed for over seven months.

During his address on January18 this year after flagging off eight trains to Kevadia from across India, Prime Minister Modi said more tourists visit the Statue of Unity in Gujarat than the Statue of Liberty in the US.

He had said that with increased connectivity, over a lakh people will visit Kevadia daily, as per a survey.

On Patel’s birth anniversary last year, Modi had also launched a seaplane service between the Statue of Unity and the Sabarmati river in Ahmedabad, further improving connectivity to the tourist attraction in Kevadia.