Gujarat riots: Nobody has raised finger on us except this petition, SIT tells Supreme Court 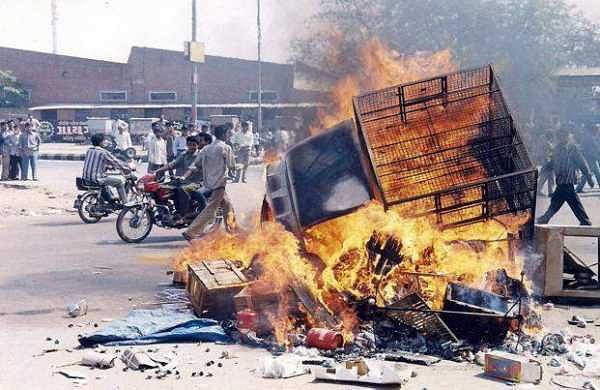 NEW DELHI: The Special Investigation Team (SIT) told the Supreme Court on Thursday that nobody has “raised a finger” against it for the probe conducted in the 2002 Gujarat riots except the petition filed by Zakia Jafri, who has alleged larger conspiracy during the violence in the state.

Zakia Jafri, the wife of Congress leader Ehsan Jafri who was killed during the violence at Gulberg Society in Ahmedabad on February 28, 2002, has challenged the SIT’s clean chit to 64 people including Narendra Modi who was the Gujarat chief minister during the riots in the state.

A bench headed by Justice A M Khanwilkar reserved judgement on Zakia Jafri’s petition against the Gujarat High Court’s October 5, 2017 order rejecting her plea against the SIT decision.

Senior advocate Mukul Rohatgi, appearing for the SIT, told the bench that the apex court should endorse what the trial court and the Gujarat High Court had done on Jafri’s plea otherwise it is an “endless exercise” which will go on because of “some motives” of social activist Teesta Setalvad, who is the petitioner number two in the petition.

“I think what the trial court and the high court have done, your lordships should endorse it otherwise it is an endless exercise which will always go on only because of some motives of petitioner number two (Setalvad),” Rohatgi told the bench, also comprising Justices Dinesh Maheshwari and C T Ravikumar, while concluding his arguments.

Senior advocate Kapil Sibal, appearing for the petitioners, referred to the work done by Setalvad’s organisations and said to “paint” us as somebody who is “anti-Gujarat, defaming Gujarat” is unfair.

“Very few times in the history of the court, matters of this moment are before you. It happened earlier on few occasions. This is yet another occasion when the majesty of the law is being tested. And here, I am not interested in targeting anybody but as your lordships know, under criminal law you take cognisance of offences and you don’t take cognisance of offender,” Sibal said.

He said it is the SIT’s task to find out who the offenders are, if any offence has been committed. “So, if nobody did it and all this happened without anybody doing it with the material which is before you, we can close it. But if you feel that offences have been committed then who is responsible is a matter of investigation,” Sibal said.

Rohatgi said that the SIT was given a job by the apex court and the team did much more than what was required. “Nobody has raised a finger against us except this petitioner,” he said.

“I have submitted and I will repeat that it is petitioner number two (Setalvad) who is driving this litigation now for the last 10 years. Ample opportunity was available at the relevant time to say something if you want,” Rohatgi said.

He said now after almost 20 years, the petitioners want the court to order further investigation in the matter.

“Now, he says do it again. I don’t know, who will do it, who will monitor. New SIT will come now, obviously you don’t trust this SIT. So, we should have another SIT. I don’t know, we should get Scotland Yard now because these fellows are from CBI. The CBI is here, police was here,” he said.

“I don’t know from where we should get. Mylords, the idea is only to keep the pot boiling for ulterior purposes of petitioner number two (Setalvad),” Rohatgi said.

Zakia Jafri’s counsel had earlier argued that her complaint of 2006 was that there was “a larger conspiracy where there was bureaucratic inaction, police complicity, hate speeches and unleashing of violence”.

Ehsan Jafri, the former MP, was among the 68 people killed in the violence, a day after the Godhra train incident.

The S-6 coach of Sabarmati Express was burnt at Godhra on February 27, 2002 killing 59 people and triggering riots in Gujarat in 2002.

On February 8, 2012, the SIT had filed a closure report giving a clean chit to Modi, now the Prime Minister, and 63 others including senior government officials, saying there was “no prosecutable evidence” against them.

Zakia Jafri had filed a petition in the apex court in 2018 challenging the Gujarat High Court’s October 5, 2017 order rejecting her plea against the SIT decision.

The plea also maintained that after the SIT gave a clean chit in its closure report before a trial judge, Zakia Jafri filed a protest petition which was dismissed by the magistrate without considering “substantiated merits”.

The high court in its October 2017 order had said the SIT probe was monitored by the Supreme Court.

However, it partly allowed her petition as far as its demand for a further investigation was concerned saying she can approach an appropriate forum, including the magistrate’s court, a division bench of the high court, or the Supreme Court seeking further investigation.