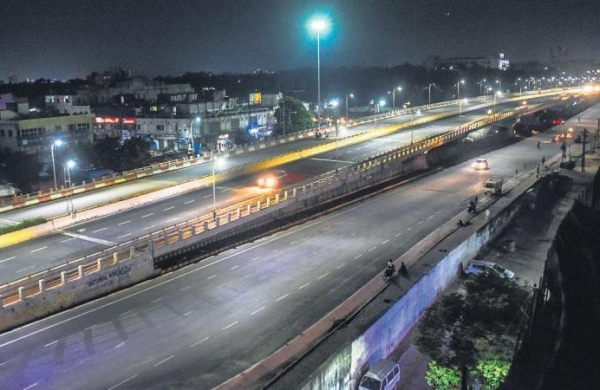 By PTI
AHMEDABAD: The Gujarat government on Thursday extended night curfew in 36 cities of the state till May 28 to stop the spread of coronavirus infections.

However, daytime restrictions were relaxed and shops, shopping malls, business establishments and other business activities were allowed between 9 am to 3 pm.

Following a direction by the Centre, the state government also notified mucormycosis or black fungus as pandemic under the Epidemic Diseases Act, 1897.

Mucormycosis is being found mostly in those who have recovered from COVID- 19.

“Night curfew will continue from 8 pm to 6 am in 36 cities of the state till May 28 to stop the spread of coronavirus infections,” a government release said.

These 36 urban areas include Ahmedabad, Surat, Vadodara and Rajkot cities.

“However, as the cases are decreasing across the state, the government has decided to offer some relaxation in day-time restrictions. All shops, shopping malls, restaurants, roadside vendors, shopping complexes, hair cutting salons, beauty parlours and other business activities can be conducted from 9 am to 6 pm,” it said.

Earlier, all shops barring those selling essential items and medicines were not allowed to open, while offices were allowed to operate at 50 per cent capacity.

At weddings, number of guests can not exceed 50, while at funerals a maximum of 20 people will be allowed.

Public transport will be allowed at 50 per cent of the vehicle capacity.

All religious places will be closed for public, but priests can perform rituals.

Mucormycosis, a rare but fatal fungal infection, was declared a pandemic under the Epidemic Disease Act.

“Now the disease will be treated in all government and private hospitals as per the guidelines issued by the Indian Council of Medical Research (ICMR) and Union health minister,” a release said.

Coronavirus cases have been steadily declining in the state.

In the last week of April the state was reporting around 12,000 new cases daily, which came down to less than 5,000 on Thursday.

The state has been witnessing a drop in coronavirus cases over the last one week.

From a little over 8,000 cases that were reported in the state on May 16, the daily case count has now come down below the 5,000-mark.

As many as 8,308 patients got discharge from hospitals during the day, which pushed the recovery count to 6,77,798 and the recovery rate to 87.32 per cent.

Of the 64 deaths, nine were reported in Ahmedabad district, eight in Surat, six each in Rajkot and Vadodara districts.

At 1,079, the highest number of new cases were recorded in Ahmedabad city, followed by 422 in Vadodara city, 297 in Surat city, 209 in other parts of Surat district and 192 in Rajkot city.

So far, 1.49 crore people have been vaccinated in the state.

In the adjoining union territory of Dadra Nagar Haveli and Daman and Diu, as many 40 new cases were reported in the last 24 hours, the authorities said in a release, adding that 55 patients recovered and got discharge during the day.