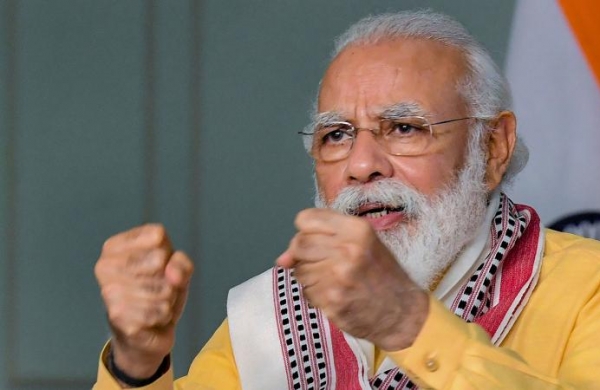 By PTI
NEW DELHI: With the BJP set to retain power in six Gujarat municipal corporations, Prime Minister Narendra Modi on Tuesday termed the results “very special” and said that for a party serving a state for over two decades to record such a phenomenal win is noteworthy.

He said the results of municipal elections clearly show the unwavering faith people have in politics of development and good governance.

The BJP appeared on course to retain power in the six municipal corporations, winning 409 of the 474 seats where results were declared till evening.

“Thank you Gujarat! Results of municipal elections across the state clearly show the unwavering faith people have towards politics of development and good governance,” Modi said in a series of tweets.

“Grateful to the people of the state for trusting BJP yet again. Always an honour to serve Gujarat,” he said.

Modi also hailed the efforts of Gujarat BJP workers who reached out to people with the party’s vision for the state.

The Gujarat government’s pro-people policies have positively impacted the entire state, he said.

“Today’s win across Gujarat is very special. For a party that is serving in a state for over two decades to record such a phenomenal win is noteworthy. It is heartening to see widespread support from all sections of society, particularly the youth of Gujarat towards BJP,” he said.

He said this “historic win” was the victory of people’s unbreakable trust in Prime Minister Modi’s politics of public welfare and development.

Whether it is Bihar assembly elections, by-elections held in 11 states or local body polls in Assam, Arunachal, Jammu and Kashmir, Goa, Rajasthan, Ladakh, Hyderabad and Gujarat, the country’s farmers, labourers, traders, youth and women have all given their support to the policies of the Modi government, Nadda said in a series of tweets in Hindi.

In another tweet, Nadda also attacked former Congress president Rahul Gandhi over his remarks in Kerala on Tuesday, saying, “A few days back he was in the Northeast, spewing venom against the western part of India. Today in the South he is spewing venom against the North. Divide and rule politics won’t work, @RahulGandhi Ji! People have rejected this politics. See what happened in Gujarat today!” Polling for 576 seats in Ahmedabad and five other civic corporations was held on February 21.

The counting of votes began this morning and is still underway.

While the Congress has won 43 of the declared seats so far.

The Aam Aadmi Party (AAP), a new entrant in these elections, has made impressive inroads by winning 18 seats so far.

Earlier, Chief Minister Vijay Rupani and Deputy Chief Minister Nitin Patel had expressed their gratitude to the voters and BJP workers for the results.