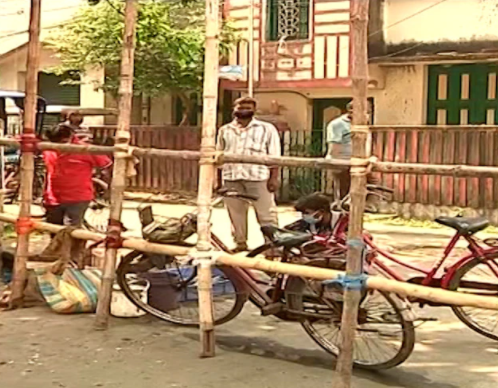 Guidelines have been issued by the state government regarding prevention and prevention of infection of Kovid-19 and Omicron variants in Chhattisgarh. Under this, it has been asked to ensure 100% compliance of Kovid compliant behavior. In this, emphasis has been given to pay special attention to social distancing including the use of masks and sanitizers. Similarly, instructions have been given to compulsorily investigate the cases of Kovid-19 and ensure compliance of the instructions issued earlier for the Containment Zone in the area of ​​active cases. A control room has been set up in health services, which will be open 24 hours a day. The telephone number of the said state level control room is 0771-2235091. Similarly, by activating the Kovid-19 control room at the district level immediately, instructions have been given to ensure wide publicity by issuing the phone number of the control room to the media. Instructions have also been given that information about COVID-19 testing, contact tracing, home isolation, hospital admission and containment zones should be prepared daily in the Kovid-19 control room and the state level control room must be informed about it by 7 pm. Instructions have been given by the state government that special care should be taken in the investigation of district wise Kovid-19. This work of investigation should not be less than the target in any situation in the district. To check the people coming from other states in the district by air, rail or road, Kovid-19 investigation should be done by arranging for checking at the airport, railway station, bus stand and border road of other states respectively. 5 percent of positive cases in RTPCR test from each district should be sent to WGS Bhubaneswar for investigation. According to the guidelines for sample testing of persons traveling abroad in the district, if they come positive, they should be sent for WGS test. A certificate should be taken from all the factories and factories operating under the district that all the people working in it have been tested for Kovid and no person is working in the said institute without Kovid test. The village where there is even a single active case of Kovid-19 should be made a containment zone till that episode remains active. Similarly, in urban areas, the ward in which there is even a single active case should be made a containment zone till that case remains active. The guidelines issued earlier for the Containment Zone should be followed. All the people coming in contact by contact tracing of Kovid-19 positive patient should be tested and home quarantine should be done till the testing report comes. All positive cases should be kept in home isolation for 14 days. All the people coming from foreign travel should be kept in home quarantine till their negative report comes in the investigation done in the district. The contacts of positive patients should be kept in home quarantine till their negative report comes in the investigation done in the district. Arrangements should be made for the treatment of Kovid-19 positive patients in home isolation as per the guidelines issued earlier. Duty of doctors and health workers should be imposed for health monitoring of persons treated in home isolation. According to the need of the patients treated in home isolation, transportation should be arranged for referral to hospitals. A web portal should be created by the department for all the Kovid-19 patients admitted in the hospitals. This portal is for both government and private hospitals. In this, the list of patients admitted and the beds available for Kovid are updated in real time, using this portal the information of patients admitted in government and private hospitals of Kovid-19 should be kept updated. Like this:Like Loading… Continue Reading