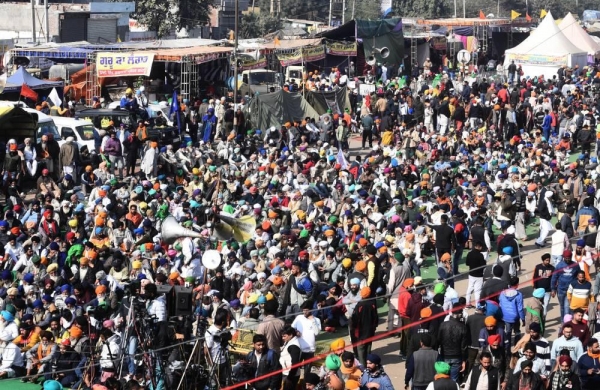 By PTI
NEW DELHI: A group of people claiming to be locals on Thursday demanded that farmers vacate the Singhu border protest site as they had “insulted” the national flag during their tractor rally on Republic Day.

The people gathered on the road near the protest site and raised slogans against “insult” to the tricolour.

Suresh, a 35-year-old labourer from Palla, said, “I work at a farmhouse near the border but haven’t been able to go work since December. My family depends on me. I am not against anyone’s movement, but I want them to leave. The protesters here breached security in Delhi and can do damage here as well.”

Thousands of protesting farmers clashed with the police during the tractor rally.

Many of them, driving tractors, reached the Red Fort and entered the monument.

They hoisted flags on the domes and placed the flagstaff at the ramparts of the national monument, where the national flag is unfurled by the prime minister on Independence Day.

Delhi border points remained under heavy police deployment on Thursday in the aftermath of the violence that broke out during the farmers’ tractor parade in the national capital on Republic Day.

Security personnel have also been deployed at the Red Fort.