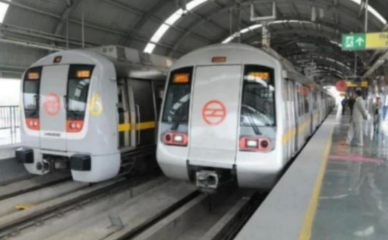 The Bahadurgarh-Delhi metro rail service, which remained closed for 171 days due to the lock down imposed due to Corona virus, has been resumed today. The metro line from Bahadurgarh to Indralok and Kirti Nagar is part of the Green Line Metro. The first metro ran on Green Line from 7 am on Thursday. This time, the metro officials have been called to take some special precautions by those traveling in the Metro.

Payments in cash have been completely stopped for traveling in the metro. That is, the journey through token will stop completely. Only card holders will be able to travel in the Metro with cashless payments. Passengers have to take special care to get in or out of the metro station through escalators. Leaving two steps and standing on a ladder. Only 3 passengers have been approved in the lift at a time. The line has been pulled in a meter radius at the station. Something similar has also been done inside the metro.

There will also be no rush of passengers at the metro station. Temperatures are being checked when passengers enter the metro station. Only after getting sanitized and masked can one get entry inside the metro station. Metro parking has also started. This time, metro rail service has been started in the morning and evening shifts. On the first day, the metro is planned to run on the Green Line from 7 to 11 am and from 4 to 8 in the evening.