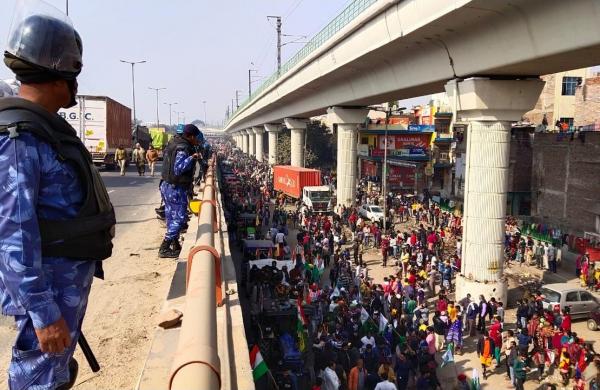 By Express News Service
NEW DELHI:  Following violence in parts of the city during the tractor rally, Delhi Police on Tuesday announced a ‘lockdown’ to prevent ‘large gatherings’ and suspended internet in several parts of Delhi.

Police authorities decided there would be no large assemblies, congregations of religious, political, social and cultural nature up to December 31.

The government also ordered temporary suspension of internet services in parts of Delhi-NCR as a tractor parade by protesting farmers turned violent at several locations in the national capital, officials said.

The internet shutdown will be effective till midnight Tuesday in Delhi’s Singhu, Ghazipur, Tikri, Mukarba Chowk, Nangloi and their adjoining areas.

An order issued by the Ministry of Home Affairs said the decision has been taken in exercise of the powers conferred by section 7 of the Indian Telegraph Act 1855.

It said the suspension of internet services was necessary and expedient in the interest of maintaining public safety and averting public emergency.

People residing close to farmers protest sites said they are getting SMSes informing them about the suspension of internet services in their area.

Meanwhile, an MHA source said Rapid Action Force personnel have been repositioned in the national capital and vigil has been intensified in view of the evolving situation.

Wielding sticks and clubs and holding the tricolour and union flags, tens of thousands of farmers atop tractors broke barriers, clashed with police and entered the city from various points to lay siege to the Red Fort and climb the flagpole on Republic Day on Tuesday.

While farmer leaders, who have been spearheading the two-month protest at the national capital’s border points to demand a repeal of the farm laws, disowned the protesters, one young man was seen hoisting a yellow triangular flag at the flagpole – the centrepiece of the country’s Independence Day celebrations.

The protesters were later removed from the premises of the Red Fort.