Government schemes are being disseminated in Halbi, Gondi and Chhattisgarhi in the districts of the division 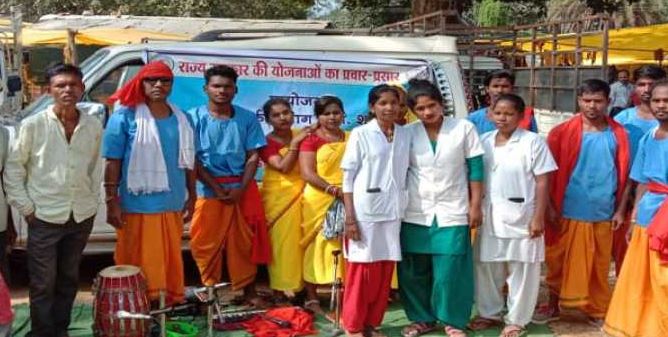 The state government has taken a unique initiative to make its public welfare schemes accessible to the tribals and forest dwellers in their bid in an easy and simple manner. Under this, Kala Jatha Dal went to the Haat-Bazaars with the major schemes of the state government such as Chief Minister Suchitan Abhiyan, Chief Minister’s Haat-Bazar Clinic Scheme, Chief Minister Slum Health Scheme, Rajiv Gandhi Nyaya Yojana, Narva, Garuva, Ghuruva and Bari Yojana among other government schemes To inspire the villagers to join and take advantage of them, the local dialects are presenting people in theatrical and dance forms in a natural manner. The public relations department of the state government is promoting the government’s schemes in Chhattisgarhi with local dialects like Halbi, Gondi and Bhatri through local Kalajathas in all the seven districts of Bastar division. The programs presented by art groups through song, music, folk dance and drama in local dialects are not only attracting the villagers, but also motivating them to take advantage of the schemes. Programs have been designed in the local culture, tradition, dance and theatrical style to connect the local people in the promotion of the schemes. In the midst of local culture, theater, skit, information about public welfare schemes is being given to people in an interesting manner. Under this, schemes are being disseminated by art groups in Halbi and Gondi and in Chhattisgarhi in Kanker district in the six districts of Bastar division, Bastar, Dantewada, Bijapur, Sukma, Kondagaon and Narayanpur districts. Publicity materials of departmental schemes published by Public Relations Department are being distributed free of cost by art groups.