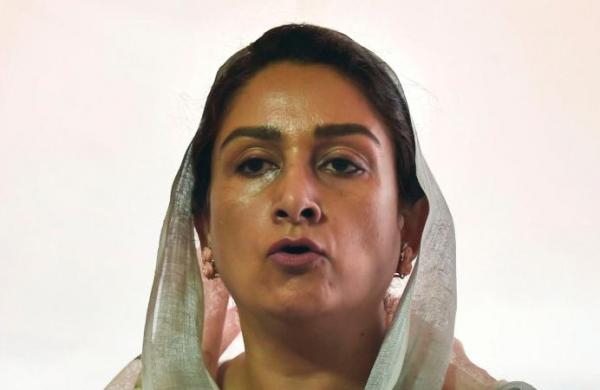 By PTI
NEW DELHI: The Akali Dal on Tuesday accused the government of committing atrocities on farmers agitating against the three agricultural laws at Delhi’s borders and criticised it for linking the peasants’ movement with terrorists and Khalistanis.

Akali Dal member Harsimrat Kaur Badal said farmers are braving the cold and waiting at Delhi’s borders but the government’s “eyes and ears are shut”.

“On Constitution Day (November 26), lathis and tear gas rained on unarmed farmers,” she alleged participating the debate on the motion to thank the President’s address to the joint sitting of Parliament at the start of the Budget session.

The Akali Dal was part of the ruling NDA till it quit the alliance in September 2020 in protest against the three laws.

Subsequently, Badal, who was a minister in the Narendra Modi government since 2014, resigned from her post.

Waving posters and photos of farmers, who died during the agitation, she said no sympathetic word has come from the government for them.

“I was in the government for six years but when it became inhuman, what is the point of staying in such a government. Even when these (agriculture) ordinances were brought in, I told the cabinet to consult more people. I was told that they will do that when the ordinances become law,” she said.

“They gave us the laws and told us to take them to farmers. When we did that, we understood the apprehensions of the farmers. We gave a letter to the agriculture minister,” she said.

Badal also quoted the report of the working committee on agriculture which was headed by Narendra Modi as Gujarat chief minister in 2011 and said how it pitched for the minimum support price as a guarantee.

“Some ministers first called it as an agitation of middlemen, then Maoists, then terrorists and then Khalistanis,” she said.

Participating in the debate, BJP member Nishikant Dubey challenged Congress leader Adhir Ranjan Chowdhury to prove his accusation that workers of the saffron party were behind the January 26 violence at the Red Fort in Delhi.

“He (Chowdhury) said that BJP workers were involved in January 26 violence. If it is proven, I will resign as an MP. Congress has a history of distortion. He should apologise for distorting the facts,” he said.

Lavu alleged that the opposition Telugu Desam Party (TDP) was playing divisive politics in the state.

In his speech, TDP leader Srinivas Keshineni praised the central government for the efficient management of the COVID-19 pandemic.

He, however, opposed the proposed disinvestment of Vishakapatnam steel plant and recalled the movement that was launched to set up the industry.

Bahujan Samaj Party (BSP) leader Danish Ali raised the ongoing farmers’ agitation and described how the peasants were braving the cold and waiting to get their demands fulfilled.

“Several international voices have come. Our party’s stand is clear that we don’t welcome international interference in our internal affairs. But who gave them this opportunity?” he said.