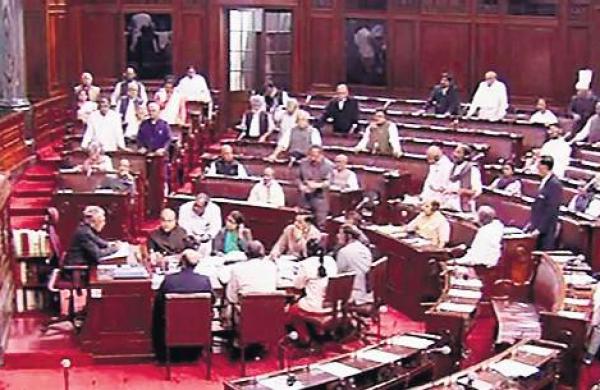 By Express News Service
NEW DELHI:  With the monsoon session of Parliament entering the last leg, the government is hoping for a division in the Opposition ranks by taking up discussions on Covid-19 and farmer agitations in Lok Sabha, while packing the legislative businesses in both the Houses.

The Opposition stays on an aggressive course against the government on the Pegasus snooping issue, with no indication till late Sunday evening of a breakthrough in the ongoing standoff in the Parliament.“There’s no positive development despite a number of efforts made by the NDA leaders in both the Houses. We will see what happens on Monday,” said a floor manager of the NDA in the Parliament.

However, the agenda for the Lok Sabha includes a short discussion on the situations emerging out of the Covid-19 pandemic, which is being moved by RSP leader NK Premchandran and Shiv Sena’s Vinayak Bhaurao Raut under Rule 193, which doesn’t entail voting, but only a response from the concerned minister.

The bulletin for the lower House has also listed a business to discuss a statutory resolution seeking disapproval of the “Commission for Air Quality Management in National Capital Region and Adjoining Areas Ordinance, 2021, and passing of a bill to replace it, which is likely to be in line with the agreement arrived at during the earlier stages of negotiations between the government and the farmers’ unions before talks broke down.

The government has packed legislative business for the ongoing session, and the NDA floor managers appear determined to push through the bills even if Opposition MPs camp in the well of the House.   “Congress and Trinamool Congress leaders are particularly not showing any accommodative stance to arrive at a formula to break the deadlock in the Parliament.

There exists no chance of the government accepting their conditions for taking up discussions on the Pegasus issue, that the Prime Minister or the home minister be present in the House and either of them reply afterwards. Other Opposition parties have, however, expressed keenness for a compromise. Discussion on Covid-19 will be watched,” said a Union minister, who didn’t wish to be identified. The Rajya Sabha had taken up discussions on Covid-19 before lapsing into pandemonium over the Pegasus issue.