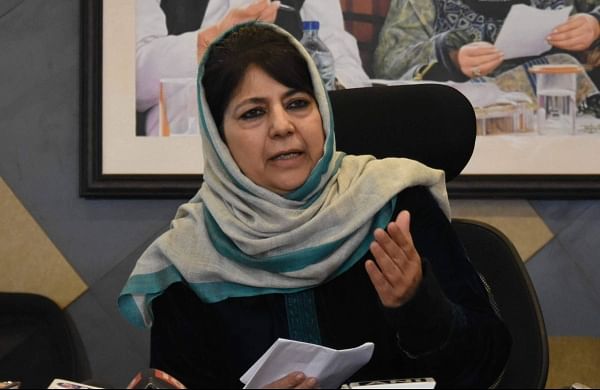 A PDP leader said the party’s youth convention was scheduled to be held at Mehbooba’s Gupkar residence today.

Mehbooba was to interact with party workers at around 11 am, he said.

The PDP leader said authorities have disallowed the convention by placing Mehbooba under house detention and not allowing party workers to visit her residence to participate in the convention.

The authorities have denied permission for the PDP convention citing Covid-19 restrictions.

“In view of the report received by the office of Senior Superintendent of Police, Srinagar, and COVID-19 restrictions in place, it is hereby ordered that the scheduled youth conference that is to be held by PDP at Gupkar is hereby not allowed,” reads an official order.

The PDP, however, released a video message of party chief Mehbooba Mufti in which she alleged that the government is inventing new ways to dis-empower youth.

“They want to keep youth away from democracy so that they will follow a path of violence and it becomes easy for them to kill, beat and jail them. They are doing this for the last three years. They are not allowing youth to come from their homes.  Thousands of youth from the Valley wanted to come today to hear us. They wanted to talk on J&K situation,” she said.

Alleging that the government is scared of youth, Mehbooba said, “We will continue to struggle peacefully and democratically for J&K’s peace, prosperity, dignity and resolution of the Kashmir issue.”

“PM Modi talked to the US president Joe Biden on Indian democracy recently but there is no sign of democracy in J&K,” she said.

“I have been telling that we, especially the youth, have to be united and tell them (the government) that we are not afraid. Had we been afraid, then why would we have chosen this path. Like other parties, we too would have made comprises. Had we done that, we would not have been denied permission to hold a meeting inside the house on the pretext of Covid,” she said.

The PDP chief alleged that they have left nothing for us. “They are snatching our land, jobs and resources. They are looting it. And this loot is not ending. They are working like dacoits”.

“I wonder why the rulers are afraid of youth and our party. When they are not afraid of other parties, why are they scared of us,” she added.