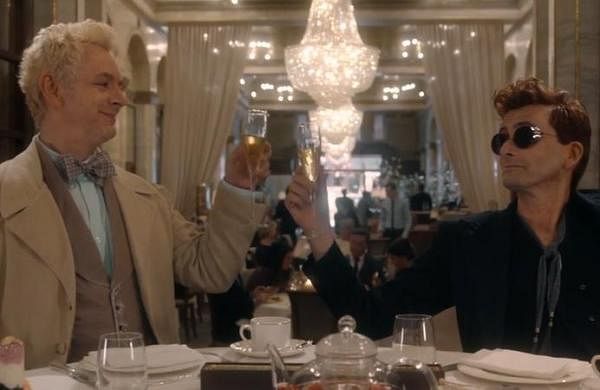 MUMBAI: Production has begun in Scotland on the second season of the Amazon Original series “Good Omens”, starring award-winning actors Michael Sheen and David Tennant, who return in the leading roles of the angel Aziraphale and demon Crowley.

Supporting Sheen and Tennant are many of the key cast from the first season, who return for the season with some reprising their roles, and others playing new characters.

A premiere date will be announced later.

Originally based on Terry Pratchett and Neil Gaiman’s international best-selling novel, the new season will explore storylines that go beyond the original source material to illuminate the uncanny friendship between Aziraphale, a fussy angel and rare book dealer, and the fast-living demon Crowley.

Having been on Earth since The Beginning, and with the Apocalypse thwarted, Aziraphale and Crowley are getting back to easy living amongst mortals in London’s Soho when an unexpected messenger presents a surprising mystery.

“It’s been an absolute pleasure to have the brilliant John Finnemore co-write this season’s story shenanigans with me, and to work with director and my co-showrunner Douglas Mackinnon as he steers the ship, along with our astonishing crew, who have returned to do it again,” writer and co-showrunner Neil Gaiman said in a statement.

“Having a company of players reuniting for this second season of Good Omens is like bringing a family back together, this time in Scotland. Not only the cast, but also many of our Good Omens Season One crew have reassembled. Our team is being enriched with new talent on both sides of the camera so I am excited to be at the helm for six more episodes of what we hope will be heavenly entertainment,” co-showrunner and director Douglas Mackinnon said.

The new season is produced by Amazon Studios, BBC Studios Productions, The Blank Corporation, and Narrativia.