Godse Gyanshala closed just a day after opening in Gwalior 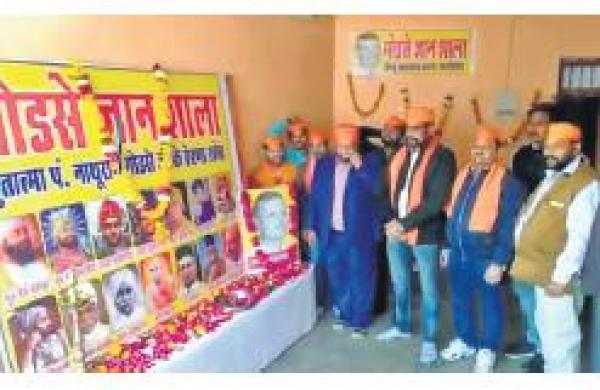 In pursuance with Section 144 of CrPc, prohibitory orders have been issued by the district administration to ban any act meant to glorify Nathuram Godse, the Gwalior SP said.

Earlier, on Sunday, the Hindu Mahasabha had unveiled the Godse Gyanshala at its state HQ in Daulatganj area of Gwalior, which had prompted the opposition to attack the Shivraj Singh Chouhan led BJP government in the central Indian state.

The Godse Gyanshala (sort of library) was started at the Hindu Mahasabha state headquarter at Daulatganj area of Madhya Pradesh’s Gwalior on Sunday.

The Gyanshala was unveiled at the Hindu Mahasabha’s office by garlanding the picture of Nathuram Godse as well as pictures of stalwarts who inspired him. The pictures, included Guru Govind Singh, Maharana Pratap, RSS founder KB Hedgewar, Lala Lajpat Rai, Pandit Madan Mohan Malviya among others.

“The Gyanshala will not only have pictures of Nathuram Godse, Narayan Apte( Gandhi’s assassins), but also all other Hindu nationalists, including Jan Sangh founder member Shyama Prasad Mukerjee. It will infuse spirit of nationalism among our Generation Y and Generation next, ” Hindu Mahasabha national vice president Jaiveer Bhardwaj had said.

‘It’s not only pictures of Hindu nationalists, but also literature in form of books will be kept at the Gyanshala to educate youths about the revolutionary thoughts of both Nathuram Godse and Narayan Apte, besides other nationalist leaders. The books will be unveiled at the Gyanshala on January 23, the birth anniversary of Netaji Subhash Chandra Bose, ” Bhardwaj said.

“We want to enlighten youth about the ideology espoused by Godse and Apte as well as expose those who were actually responsible for country’s partition  in 1947,” he maintained.