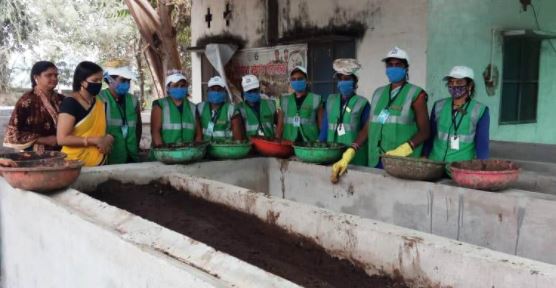 If you have the passion to do something and have the strong will to do it, then the stone paths also become a bed of flowers. Navjyoti city level association of Municipal Corporation Dhamtari has also done something, whose spirit is being appreciated all over. In the urban area, it can be called a big success of the Godhan Nyaya Yojana, where 175 women of the Sangh are engrossed in building their future with Godhan (cow dung). His confidence and smooth smile of lips are proving that in the era of chemical fertilizer, vermicompost, vermi wash and other products of cow dung have survived from every point of view.
The women of the group said that after collecting garbage from the city at eight to three in the morning, in the separate unit of the SLM center located in Danitola ward, apart from the vermi compost, Gokastha (cow dung), Kande, Agarbatti and Vermi wash was prepared. Huh. The president of the union, Smt Madhulata Sahu, said that four such centers are operated in the corporation area, where vermi compost is prepared, as well as kande, goukastha, vermi wash and agarbatti. He told that there is a great demand for Gaukastha manufactured here. Sangh members Mrs. Sangeeta Barle and Mrs. Bharti Sahu said that under the Godan Nyaya Yojana, vermicompost is prepared within 45 to 60 days by putting earthworms in the nadep stitches by the women of the group.
Commissioner of Municipal Corporation Shri Ashish Tikriha told that vermi compost is being prepared in the district under the Godhan Nyaya Yojana, besides making it more employment-oriented and multifaceted, goukastha, kande, agarbatti and vermi washes are being prepared. . He said that the Gaukashta produced here is being supplied to the Nagar Panchayats besides the Nigam area where burning as a bonfire as well as fuel (chulha) in the dhabas, offering burnt offerings to the dead bodies in the crematoriums and havan- Worship is also being offered as an alternative to wood in worship. He also informed that on an average six thousand kandas, 4500 goukasht and two and a half thousand liter vermi washes are being prepared in the city’s SRLM centers. The price of a quintal of cow milk is Rs one thousand and the price of a kande is Rs 300 per hundred, while the vermi wash liquid is sold at the rate of Rs 35 per liter. Apart from wholesale, these products are also sold in Chilhar which can be booked by calling mobile number 7470739265 and their home access service is also available. The Corporation Commissioner also informed that all these products have proved to be excellent in laboratory testing. So far, earthworm fertilizer worth Rs 39 thousand has been sold in these centers. These products are being prepared in Danitola ward, Sorid ward, Nawagaon ward and Gokulpur ward of the city. Vermi compost is being produced in the corporation area in 201 vermis beds and 300 green bags.