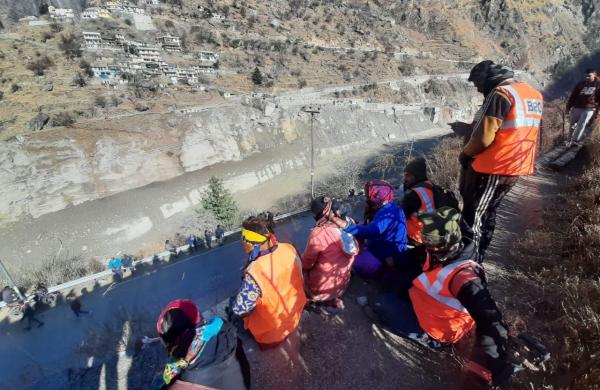 Express News Service
LUCKNOW: The 34 families across seven villages under Nighasan and Sigahi tehsils of Lakhimpur Kheri are a harried lot. The wait for those missing since Sunday’s glacier disaster seems unending. The families are running out of patience as the bodies of a few among those who have gone traceless in Chamoli, have started arriving. Many have left for Uttarakhand to trace the missing ones themselves.

A deathly silence is looming large over the villages where ‘Chulhas’ (furnaces) have no fire. “We do not have any sense right now. No food is being cooked since the Sunday disaster in the villages from where people are missing,” says Ram Achal of Babupurwa village. Moreover, people from a number of families have already left for Uttarakhand looking for their dear ones about whom there has been no information for the last four days.

The fear of the worst is soaring and it went several notches up when dismembered body of Avdhesh arrived in Ichchanagar village from Chamoli. The distraught family could not believe it. Mother Lalli Devi is falling unconscious repeatedly and on gaining consciousness she is only blaming the moment when she allowed her son to go to Uttarakhand to earn more.

A pall of gloom and despair has descended on Babupurwa, Bhairampur, Ichchhanagar, Tarankothi, Sigahi, Kadia, and Tikunia — the seven villages of the Terai district from where the maximum number of people had gone to Chamoli to work in the power projects. “They went as they were lured by Rs 500 per day wages,” says Bipin Kumar of Ichchhanaar.

The family of another labourer Dharmendra is inconsolable. The distraught family, which received his body on Wednesday, is asking the visitors to bring their son back to life.

Similarly, when the information about the death of Suraj reached Babupurwa on Wednesday, the entire village thronged his house to console the family. Similar scenes are common across all seven villages where families are awaiting information about their near and dear ones.

Meanwhile, people from various other districts including Gorakhpur, Rae Bareli, Azamgarh, Mirzapur have started leaving for the neighbouring state to search for their missing family members.

Additional Chief Secretary (Information) Navneet Sehgal said Chief Minister Adityanath had directed officers to make arrangements for transportation of UP residents who were unable to contact their family members and wished to visit Uttarakhand to know their whereabouts.

The UP government had stationed officers in Dehradun to assist people in locating their missing family members.