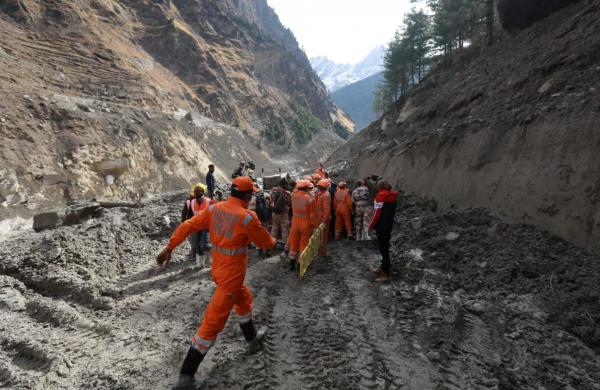 By PTI
TAPOVAN: The water level in the Dhauli Ganga river surged on Thursday, leading to temporary suspension of rescue work at the tunnel in Tapovan where 25-35 people are trapped for over four days since the glacier disaster.

Security personnel at work inside the tunnel rushed out and heavy machines engaged in drilling through the debris and sludge inside were withdrawn.

On Sunday, a glacier burst at Joshimath in the state’s Chamoli district triggered an avalanche and a deluge in the Alaknanda river system that wreaked havoc and washed away hydroelectric stations.

The death toll stands at 34 with multiple agencies racing against time to reach 25-35 workers trapped inside a tunnel at the power project site.

Except Indian Army, Indo-Tibetan Border Police and a few others, Tapovan tunnel rescue site has been evacuated after warnings of rising water levles of Rishi Ganga came from Raini Village. Sirens, whistles and alarms were sounded as a warning! @NewIndianXpress @TheMornStandard pic.twitter.com/MrAba7yeIt
— Vineet Upadhyay (@VineetTNIE) February 11, 2021