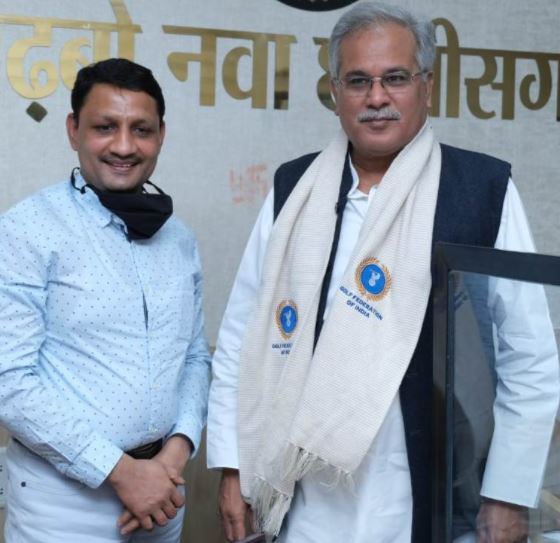 Bhupesh Baghel met courtesy Shri Aryveer, General Secretary, Golf Federation of India at his residence office in Raipur here today. He informed the Chief Minister Mr. Baghel that ‘Chhattisgarh Open Golf Tournament’ is being organized in Chhattisgarh by Golf Federation of India. This tournament is proposed to be held in Mayfair Golf Course located in Sector 24 of Nava Raipur in the last week of February or in the month of March. He urged the Chief Minister Mr. Bhupesh Baghel to join this tournament. Mr. Mahesh Wadhwani, the founder of Raipur Golf Course was also present on the occasion. Chief Minister Mr. Bhupesh Baghel congratulated and congratulated Mr. Aryaveer and Mr. Wadhwani for this event.
Shri Aryavir told the Chief Minister that this tournament is being organized to promote tourism in the state and to sensitize the new generation towards golf. International level players from countries like India, Japan and Korea will participate in the tournament. The founder of Raipur Golf Course, Mr. Mahesh Wadhwani said that this tournament will also include representatives from the embee of different countries, business community and corporate leaders. In this way, along with this tournament, there will be a grand event of investment meet, which will boost tourism as well as investment in the state.