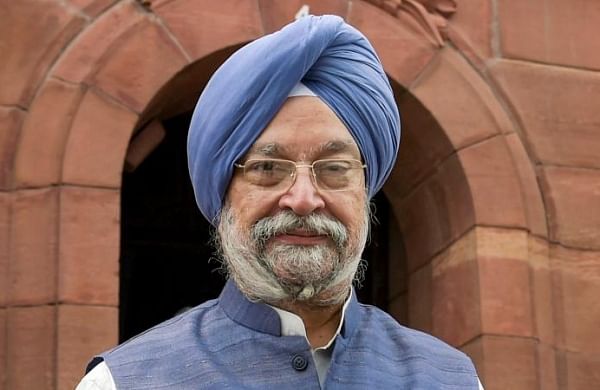 NEW DELHI: A day after cooking gas LPG prices were hiked by Rs 50 per cylinder, Oil Minister Hardeep Singh Puri on Thursday said gas prices cannot be looked at in isolation and that fuel prices have been held steady despite volatility in international oil markets.

At a media conference, when he was asked about the steep increase in LPG prices, Puri first said that the government has been constantly striving to increase domestic production of gas and that there has been no shortage of fuel supplies anywhere in the country.

“You cannot look at gas prices in isolation,” he said in reference to soaring global energy rates that have led to the price increase.

Common households pay non-subsidised rates for the cooking gas they buy after the government restricted subsidy to just poor beneficiaries who got connections under the Ujjwala scheme.

Without making a direct reference to the LPG price hike, Puri said subsidies are meant to specific target beneficiaries and for specific durations.

“Subsidies have to be regressive,” he said.

The minister said that while some nations faced a fuel supply crisis, India did not face any shortage of any fuel in any corner of the country including the North East.

“Nowhere in India, there has been a shortage.”

“We have been able to hold prices steady,” he said.

While cooking gas prices have risen on eight occasions in the last one year, they have not been in sync with the cost.

International oil and gas prices have soared after Russia invaded Ukraine in February on fears of supply disruptions.

Rates have fallen in recent days on talk of recession in the world’s largest oil consumer, the US.

Petrol and diesel prices have been on a freeze for over three months now.

The pause followed rates being hiked by a record Rs 10 per litre in a matter of 16 days beginning March 22.

In May, the government cut excise duty on petrol by Rs 8 per litre and diesel by Rs 6 per litre to cool soaring inflation.

At that time, the government also stated that Rs 200 per cylinder subsidy on cooking gas will be limited to only 9 crore poor women and other beneficiaries who got free connections under the Ujjwala scheme and the remaining users, including households, will pay the market price (also known as non-subsidised rate).

Originally, non-subsidised cooking gas was the one that consumers used to buy after exhausting their quota of 12 cylinders at subsidised or below-market rates.

However, the government stopped paying subsidy on LPG to most households in mid-2020.

International oil prices jumped to a 13-year high of USD 140 per barrel in March before shedding some of the gains.

India relies on overseas purchases to meet about 85 per cent of its oil requirement, making it one of the most vulnerable in Asia to higher oil prices.

While India has surplus oil refining capacity, it does not manufacture enough LPG to meet domestic demand and imports significant quantities from nations such as Saudi Arabia.