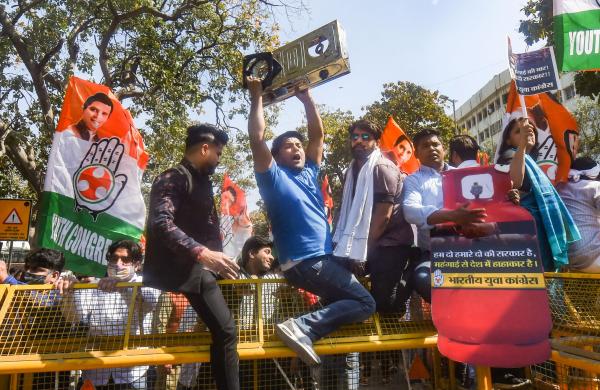 By ANI
NEW DELHI: Youth Congress workers on Tuesday staged a protest outside the petroleum ministry over rising prices of petrol, diesel and cooking gas.

Hundreds of Indian Youth Congress activists assembled outside the petroleum ministry office with placards in their hands and raised slogans against the central government. The police, meanwhile, arrested a few of the protesters to control the situation.

The prices of petrol and diesel have increased sharply over the past few days, with that of petrol touching the 100-rupee mark in some of the cities. Opposition parties have held protests in different parts of the country over the rising prices of fuel.

On February 25, Union Finance Minister Nirmala Sitharaman had said that she won’t be able to answer when the prices of petrol and diesel will be reduced.

“I won’t be able to say ‘when’. It is a ‘dharam sankat’ (dilemma),” Sitharaman said at an event in Ahmedabad after being asked when would the central government reduce fuel prices.

Union Minister of Petroleum and Natural Gas & Steel Dharmendra Pradhan has also said that price of fuel will decrease once the winter season ends.