From farms to mills, it’s a long wait for UP farmers just to get sugarcane weighed 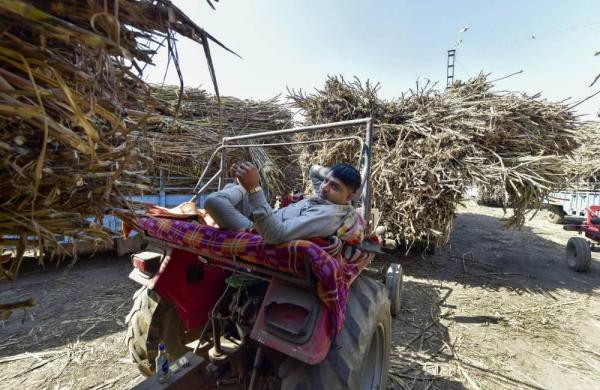 By PTI
MUZAFFARNAGAR: As thousands of farmers lay siege to Delhi borders for over 100 days demanding the repeal of three contentious farm laws, those staying back in Western Uttar Pradesh have to endure a different kind of long wait — at times for multiple days just to get weighed quintals of sugarcane lying in tractor-trollies on their way from farms to mills.

Some pass their time chit-chatting about the ongoing protests, others while smoking bidis or cigarettes, but all of them sound worried about loads of sugarcane drying under a scorching sun, while Punjabi and Haryanvi songs continue to blare out loudly, either from their mobiles or small speakers fitted in their vehicles.

Also, problems for them are much more beyond the three laws that have been in limelight due to the protests at the national capital borders.

Almost a hundred tractor-trollies, each loaded with 300 quintals of sugarcane on an average, can be seen parked in a barren field near the Bhopada weighing scale in Budhana tehsil here, barely two kilometres from the Dhampur sugar mill — the final destination of the load and their carriers after days-long ‘weighing’ halt.

Some drivers, many of them farmers with small landholdings, even have arrangements made for sleeping on cots fitted under their ‘trollas’ (customised and bigger trolleys used to transport sugarcane).

“It has been two days since I am waiting at this weighing scale and looks like it will take me another two days for my work to be done so that I can take my stock to the sugar mill,” Rohit Balyan, who hails from Kutba village, told PTI.

“The exhausting long wait at weighing scales hurts farmers because the sugarcane load starts drying up under the sun and by the time one’s turn comes for measurement, the weight comes down a bit,” the 21-year-old Balyan said while lighting up a cigarette borrowed from a friend waiting next in the queue.

A sugar mill official in Muzaffarnagar, which is widely known as the ‘sugar bowl’ of India and also has Asia’s largest gur mandi (jaggery market), told PTI the weight loss during the waiting time is only a few kilogrammes but farmers argue this loss means a lot to them because their earnings go down by thousands of rupees.

However, mill owners put the blame for the delay in weighing the crop on farmers growing sugarcane way beyond the daily intake capacity of the mills and also on lack of weighing facilities in the region.

They also claim that sugar production from the region is often in surplus vis-a-vis the market demand and therefore they do not have enough incentives to further enhance their processing facilities.

Farmers also claim that sugar mills are procuring sugarcane at Rs 325 per quintal, lower than the government-fixed Minimum Support Price (MSP) of Rs 385.

“We are not getting the MSP and then we have to wait here for days at the weighing scale. The sugarcane starts drying up after a couple of days and this means a reduction in weight and money for us,” said Anuj Tomar, who hails from Kakda village.

Tomar, 25, said he has been standing in the queue for days with sugarcane produced in his family’s 27-bigha land.

Among those waiting at the weighing scale are also people who do not own land but are engaged in transporting sugarcane from farms to sugar mills after getting the yield measures at weighing scales.

For them also, the loss of time during a peak work season means loss of money.

Harsoli village resident Mukeem, 35, said he uses his tractor-trolla for the transport work like many others in the region, who are typically paid nearly Rs 12 per quintal of sugarcane from the mills.

“It has been three days since I am standing here. I have got more than 300 quintals of sugarcane loaded on my trolla. If we get it measured quickly, then I can do more rounds and make more money,” Mukeem said.

He is also upset over an order of the National Green Tribunal (NGT) that calls for phasing out old tractors in the National Capital Region (NCR).

Muzaffarnagar, which thrives on sugarcane production, is among the areas affected by this order.

“How are we supposed to phase out our tractors just because they are 15 or 20-years old. They are working fine for us. The price of diesel has gone up sharply in the last 10 years. The rate we get for transportation is still the same but nobody is bothered about these issues,” he said.

Also waiting for two days at the weighing scale are Raju Tyagi, 23, from Osika village and 23-years-old Saleem from Kethal village, both of whom strongly support protesting farmers’ demand for a legal guarantee on the MSP and repeal of the three contentious agriculture laws.

Transporting sugarcane is a seasonal work both Tyagi and Saleem take up and are mightily upset over the long delays at weighing scales.

“I hope that one day the government will consider our issues also,” Saleem said.

According to the Muzaffarnagar administration estimates, more than 40 per cent of the district’s population is engaged in agriculture with sugarcane farming topping the chart.

Sugar mill officials say much of the problem related to sugarcane farming in the region is due to the surplus yield of sugarcane and the limited production capacity of the mills.

“There are eight sugar mills in Muzaffarnagar alone. The one in Khatauli is the biggest in Western Uttar Pradesh and has a purchasing capacity of 1,30,000 quintals a day,” a sugar mill official said requesting anonymity.

“Farmers in the region mostly grow sugarcane and wheat. While wheat is mostly grown for personal consumption, they sell sugarcane to mills because of the MSP on it. That leads to sugar being in surplus, which in turn results in various problems related to it,” the official said.

A measure to check these problems can only be policy-driven by the government, the official suggested, adding there should be an upper limit for farming of sugarcane.

“Farmers here are growing sugarcane on 90 per cent of their lands. If that is reduced to say, 60 per cent, and farmers are asked to grow other crops also, then a solution could be in sight,” he told PTI.