‘From darkness to light, new dawn of development visible’ 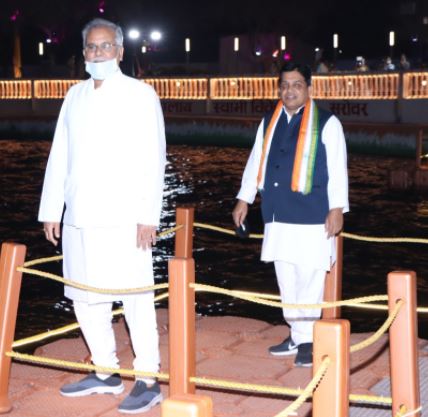 10 December 2020, the wheel of time has now moved forward. The city is no longer just a city, Smart has moved its way towards the city. Since our state of Chhattisgarh is a farmers’ state. The identity of this region is already known as a rice bowl. The nature of the village is also changing rapidly with the prosperity of the farmers symbolizing self-respect and hard work. Small cities are expanding and expanding in size, turning the surrounding villages into colonies. It is natural that new colonies are settling with dreams of many facilities according to the needs of present and future rather than small cities. There is a new generation in these colonies. There is new thinking and new needs. Chief Minister Bhupesh Baghel and Urban Administration and Development Minister Dr. Shiv Kumar Dahriya are making all-out efforts to improve the urban areas to meet the new thinking and new needs of the new generation.

With a view to encourage local Chhattisgarhi culture and extinct local tradition, Pauni-Pasari scheme has been started in all 166 urban bodies. In the Pauni Pasari scheme, a total of 255 Pauni-Pasari markets will be developed at a cost of 30 lakhs per unit, which will create new employment opportunities for 12240 families related to this tradition. In this scheme, in the developed markets, the platform will be made available for business with a value of only Rs 10 per day. Mobile handing dealers will be identified at the main place of wards and vending zones will be given suitable space for business. The Separation-based Solid Waste Management Model of Mission Clean City Scheme implemented in Chhattisgarh has been described by the Green Tribunal as exemplary for other states, representing best practice. The scheme provided employment to more than 9 thousand women members of self-help groups in the state, while the result of their hard work is that urban Chhattisgarh has achieved the status of being the cleanest state in the Swachh Survekshan 2019 and Swachh Survekshan 2020. During the nationwide lockdown during Kovid 19, these women have set an example by discharging their