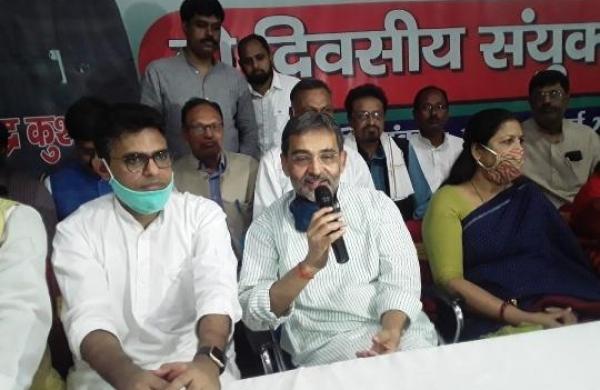 Express News Service
PATNA: Putting an end to all speculations on Sunday, founder of Rashtriya Lok Samta Party (RLSP) Upendra Kushwaha announced the merger of his party with all ideologies and individuals with the ruling Janata Dal (United) (JDU) on Sunday.

“RLSP will work for common causes under the leadership of chief minister Nitish Kumar to make Bihar stronger,” Kushwaha told in a press meet.

“Even before floating the RLSP, I had worked elaborately for the JDU. The merger is happening in the larger interest of the state.”

According to political analysts, the merger was long speculated following the debacle that RLSP faced in the recent assembly polls in Bihar. Recently, close to 35 senior RLSP leaders had joined the RJD.

When asked what his role will be like after the merger, Kushwaha said that he has left it on CM Nitish Kumar to decide and further hinted that he would work for boosting the education sector in the state with the support of all the parties in the alliance.

On being reminded of his statement on Nitish Kumar an enemy by one of the reporters, Kushwaha asked him to forget what was said in the past. “There is no need of an enemy when you have a friend like Nitish Kumar,” the RLSP founder had said.

An evidently elated Kushwaha, while describing Nitish Kumar like his elder brother, said that all like-minded people in politics with common ideologies should come on one platform.