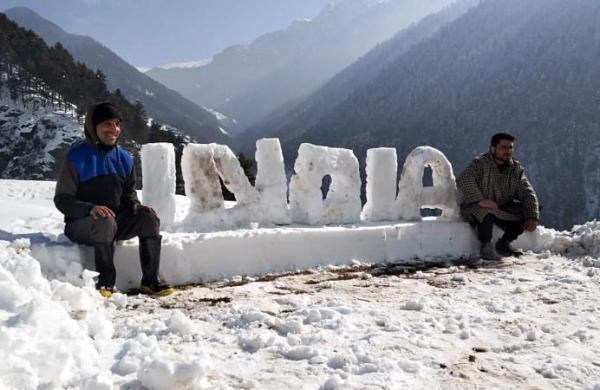 Express News Service
SRINAGAR: The ongoing spell of biting cold, known as the 40-day Chilai Kalan, is wreaking havoc, with mercury dipping to minus 7.8 degree to give Srinagar its coldest night eight years on Wednesday. While the fresh bout of snowfall led to the closure of Srinagar-Jammu national highway, the weatherman said that the spell was not unprecedented as heavy snowfall was recorded last year as well. However, the meteorological office warned of nights turning more chilly as the week progresses.

Waterbodies, including portions of the famed Dal Lake, remained frozen, forcing boatmen to break the ice. Bonfires became a usual sight across the region, while commuters had a tough time negotiating the icy roads in the morning. The Director of the meteorological office in Kashmir, Sonam Lotus, warned that the night temperature may drop to -9 degrees Celsius in next two to four days.

Kashmir is presently in the grip of a 40-day harshest winter period known as Chilai Kalan. During the Chilai Kalan, which starts on December 21 and ends on January 31, chances of snowfall soar. The Valley received heavy snowfall for three days from January 3, throwing life out of gear. It not only disconnected Kashmir’s surface and air link but also plunged Valley into darkness as electricity poles and wires were damaged. Although electricity was restored within 24-72 hours, snow was not cleared from the roads, confining people to their homes.

After facing criticism, officials pressed men and machinery into service to clear snow from the roads. However, all the main roads were not cleared.  People at most places in interior areas and localities cleared snow from lanes and bylanes on their own. Mushtaq Ahmad, a resident of Uranhall in south Kashmir’s Anantnag district, had to hire a vehicle for snow clearance to take his wife (a cancer patient) to a hospital in Srinagar. He paid Rs 3,000 to the driver.

Highway blockedSrinagar-Jammu highway, on which the Valley is dependent for supplies, was closed for traffic after a portion of a bridge in Ramban area collapsed on Sunday. NHAI said it would take 10 days for reapairs

A boatman stands on the frozen surface of the Dal lake in Kashmir.The spell of biting cold has resulted in temperaturefalling below freezing point | PTI