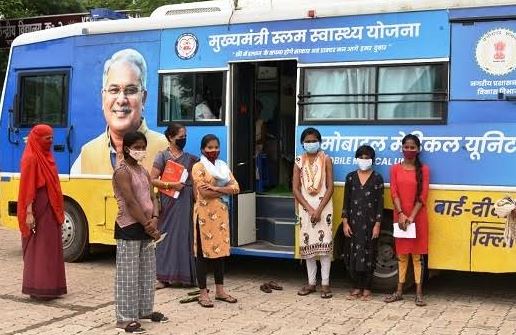 So far, more than 25 lakh people have been treated by the medical team of Mobile Medical Unit by reaching the slums of the poor through Mukhyamantri Shahari Slum Health Scheme. Under the scheme, doctors, paramedical teams, 120 mobile medical units equipped with medical equipment and medicines are now providing health facilities to the people in the slums of the urban areas of the entire state. Under the scheme, so far five lakh 15 thousand 574 patients have been provided with the facility of pathology test and free medicines have been given to more than 20 lakh 92 thousand 266 patients. Two lakh 41 thousand 865 workers are also among the patients benefited under the scheme. It is often seen that poor people are unable to reach the hospital due to many reasons, due to which they cannot get treatment. Chief Minister Shri Bhupesh Baghel understood this plight of the poor. He envisaged that doctors arrived at their homes to treat the poor. Vehicles of mobile medical units in the cities are roaming around and treating the poor living in slums. Under the Chief Minister’s Urban Slum Health Scheme, run by the Urban Administration and Development Department of Chhattisgarh Government, so far, 35 thousand 801 camps have been organized in the slums of 169 urban bodies of the state and medicines have been given free of cost to the people. Urban Administration and Development Minister Dr. Shivkumar Dahria has directed the departmental officers to conduct health check-up and provide free medicines to the needy people of the cramped settlements of urban areas. In order to provide health facilities to the people living in the state, the first phase of Mukhyamantri Shahari Slum Health Scheme was started on 01 November 2020. Under this, health check-up and treatment and drug distribution of people were started by going to slums by 60 mobile medical units. People reached home through this scheme by Chief Minister Bhupesh Baghel. In view of the health facility, on 31 March 2022, it was expanded to the urban body areas of the entire state and 60 more new mobile medical units were started. Like this:Like Loading… Continue Reading