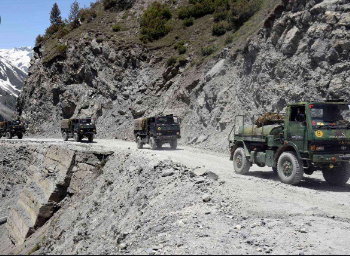 Line of Actual Control ( India China tension at LAC) in New Delhi Eastern Ladakh) Stress is extreme. To reduce this, several rounds of talks have been held at the diplomatic and military level, but at the moment there is no solution. On Wednesday, for the third consecutive day, the two countries held an India-China Bregade Commander level talks but no ‘concrete result’ was found. Now the Indian Army is also trying to fill those places in the entire LAC where there is a possibility that an attempt can be made by the Chinese side. According to sources, the Indian Army has also made some changes in its deployment towards the northern side of Pangong Lake i.e. Finger Area in such a way that the situation is much stronger. Chinese troops moved to Finger-4 in May and after disengagement negotiations, they withdrew from Finger-4 base to Finger-5 in the first week of July, but are still present at the peak of Finger-4.

According to sources, the Indian Army has started constant patrolling in many places where the soldiers of the two countries are not deployed according to the agreement. There are many places on LAC where both countries lay claim, but no soldiers are stationed there. Just the soldiers of both countries go there for patrolling. A senior official said that the way China tried to capture the peaks in the south shore of Pangong Lake, it could do so elsewhere. He said that China has succeeded in doing this in the north shore of Pangong Lake i.e. Finger Area, but now the Indian Army will not give any such opportunity to China anywhere on LAC. where Chinese troops had come and settled in Finger-4, which is also an area where the deployment of troops of both countries. Did not happen. Soldiers on both sides used to come there for patrolling and went back. But China broke the agreement and put its soldiers there. The Indian Army fears that China may try to do this elsewhere as well, hence LAC is constantly being monitored everywhere. Also, the deployment of troops has also been done in such a way that if there is a movement of China, then it can be thwarted immediately. According to the sources, according to the new plan, soldiers have been sent to the forward area at some other places too.