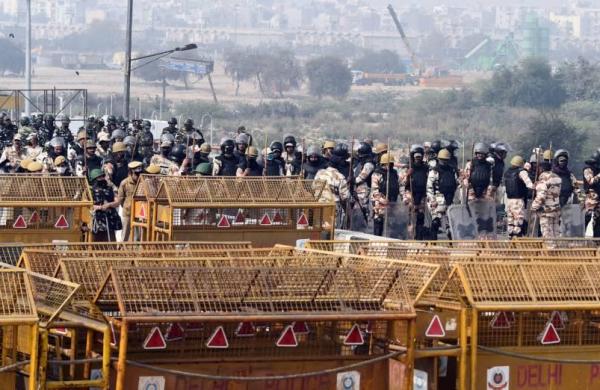 By PTI
GHAZIABAD: Stringent security continued on Wednesday at Ghazipur on the Delhi-Uttar Pradesh border, one of the key protest sites where thousands of farmers are camping with a demand that the Centre repeal the new agri-marketing laws enacted last September.

Internet services remained disrupted for the fifth day at the site on Delhi’s outskirts where protesters are occupying a stretch of the Delhi-Meerut highway since November, even as a Ghaziabad Police officer told PTI that online connectivity has been restored but there could be glitches.

While scores of people on tractor-trailers continued to pour in Ghazipur from the Uttar Pradesh side of the highway, several farmers left for their native places with a resolve to make the February 6 “chakka jaam” a success in their regions, Bharatiya Kisan Union media in-charge Dharmendra Malik said.

People also came in from districts like Amroha and Bijnor in western UP, he said, adding among prominent ones were Samajwadi Party MLA Parvez Ali, who has extended support to the farmers’ movement here.

BKU’s Ghaziabad unit president Bijender Singh who was present at the UP Gate (Ghazipur) said preparations were on to make the Saturday’s “chakka jaam” (blocking of roads as a form of protest) a success.

The call for the February 6 stir has been given by the Samyukta Kisan Morcha, an umbrella body of farmer unions protesting the farm laws.

Some of the people who reached the protest site said they faced problems reaching the site due to the barricading of Ghazipur from three sides, while some camping here since a few days rued the lack of mobile toilets and water while others struggled with internet connectivity.

“We had to take a long detour instead of a straight and short route to Ghazipur,” a man who reached here with a group of supporters in a tractor-trailer from Haryana told a TV channel.

The Union Ministry of Home Affairs had announced suspension of internet services at the three border points of Singhu, Tikri and Ghazipur and their adjoining areas from 11 pm on January 29 till 11 pm on January 31.

Later it extended the suspension till 11 pm on February 2.

“There has been no further extension of internet suspension at these sites as of now,” a Home Ministry official said on Wednesday.

BKU’s Meerut zone president Pawan Khatana said the internet was inaccessible at Ghazipur till the time he left for a “mahapanchayat” in Haryana’s Jind with union leader Rakesh Tikait and other supporters.

Ghaziabad Superintendent of Police (City 2) Gyanendra Singh told PTI that internet services have been restored but there could be glitches or slow speed due to crowd at the protest site.

BKU’s Malik said the barricading and stringent security measures by the Delhi Police have hit traffic movement, leading to difficulties to people and even ambulances.

He said farmers are agitating for their demands not to disturb others.

“The Delhi Police has blocked all routes from the Ghazipur border to Delhi. The one lane which was kept open on the stretch occupied by farmers has closed due to police barricading. The farmers have been demanding to give way to ambulances for two days. With no one hearing our appeal, we have opened a way for ambulances from between our tents and ambulances are being taken out from under the UP Gate flyover and sent to Anand Vihar via Kaushambi,” he said.

On the security apparatus at the protest sites, Delhi Police Commissioner S N Shrivastava had Tuesday told media, “We have only strengthened the barricading so that it is not broken again.”

Thousands of farmers have been protesting at the Delhi borders with Haryana and Uttar Pradesh, demanding a rollback of the Farmers’ Produce Trade and Commerce (Promotion and Facilitation) Act, 2020; Farmers’ (Empowerment and Protection) Agreement on Price Assurance and Farm Services Act, 2020; and the Essential Commodities (Amendment) Act, 2020.