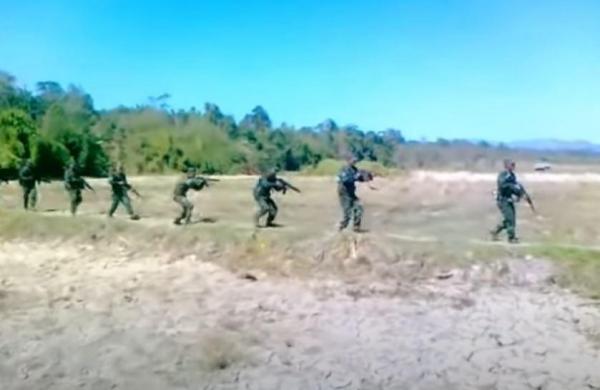 By Express News Service
GUWAHATI: As the BJP is seeking votes for restoring peace in Assam, some former leaders of the erstwhile insurgent group National Democratic Front of Bodoland (NDFB) have returned to the jungle and floated a group to resume the armed movement.

In a video statement released to the media, the leaders of the newly-floated “National Liberation Front of Boroland” (NLFB) said the Centre and Assam government’s lack of interest in solving the Bodo issue compelled them to continue with the struggle and fight for rights.

Stating that the BJP is a “big threat” to Assam, the rebel group, which is headed by MD Batha, appealed to people to drive out the party out of Assam.

Batha was among 1,615 insurgents who joined the mainstream by laying down weapons in January last year after the Centre had signed the Bodoland Territorial Region (BTR) pact with four NDFB factions and the All Bodo Students’ Union.

The police confirmed that a section of the militants returned to the jungle and formed a group. In Lower Assam, the militants are known to operate out of the soil of Bhutan.

“We believe they have formed a group with a new name. They might be having 25-30 people but all are not former militants. There might be some overground workers,” Additional Director General of Police of BTR, LR Bishnoi told this newspaper.

“They have weapons with them. Batha had surrendered along with G Bidai and others. After that, he went underground,” the ADG said.

BR Ferenga, a former NDFB leader who is now an executive member of autonomous Bodoland Territorial Council, alleged the group was formed at the behest of rebel leader-turned-politician Hagrama Mohilary who heads the political party Bodoland People’s Front.

Bishnoi said: “Rumours are floating here and there that they are being patronised by a political party. But unless we have evidence, we will not be able to substantiate it.”

The Congress questioned the BJP’s sincerity in solving the insurgency problem.

“The very fact that a new militant group has been formed is very unfortunate and it speaks volumes about the kind of sincerity of the BJP in keeping up the process of lasting peace in Assam,” the party’s media department chairperson Bobbeeta Sharma said.

She continued: “During Congress government led by Tarun Gogoi, 13 militant groups had surrendered and around 14,000 youth joined the mainstream. The Union Home Ministry has not appointed any interlocutor to keep open the channels of communication between the government and militant groups like ULFA or others. The position of the official interlocutor has been lying vacant for long after the term of AB Mathur expired. So, who is serious about maintaining peace in Assam after the Congress party brought peace and stability is a big question.”

Both Congress and BJP took steps to restore peace in Assam. But in election rallies, BJP’s Central leaders, including Prime Minister Narendra Modi, are seeking to take credit for it.