For the smooth supply of sand, the Department of Minerals approved 107 sand storage permits this year 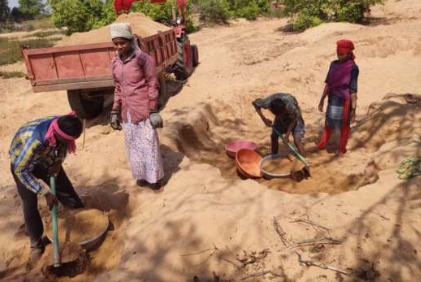 Due to the efforts of the state government, the supply of sand in the state is getting smooth. Sand prices have reached pre-rainy levels in most districts. In order to ensure smooth supply of sand under the direction of Chief Minister Shri Bhupesh Baghel, a special effort has been approved by the Mineral Department this year in total 107 sand storage permits in the state. Besides, taking strict action against illegal excavators of sand in various districts of the state, cases were registered against them and fine amount was recovered. According to information received from the Department of Minerals, 37 crore cases of illegal mining, one thousand 726 cases of illegal transport and 26 cases of illegal storage have been registered and Rs 2 crore 7 lakh 49 thousand 89 rupees have been recovered from the concerned people. .
It is noteworthy that at present, a tender has been floated in 319 sand mines in the state. After receiving the consent of the environment in 210 sand mines, these mines are being operated after the contract and in the remaining sand mines, the process of obtaining environment consent is under process. At present, tender has been issued for allotment of sand mines in all districts of the state. Currently, according to the guideline issued by the Ministry of Environment, Forest and Climate Change, Government of India, sand mining was banned in the rainforest from June 10 to October 15 for the state of Chhattisgarh. The average price of sand in the eastern region of Varsha Rutu was 5000-7000 rupees per highwa (10 cubic meters). The value of sand increases in the state every year during rains, During this year, a total effort of 107 sand storage permits was approved in the state by the Mineral Department with special efforts for smooth supply of sand. Since the storage license area has seen a partial increase in sand prices due to limited storage capacity. After the rainy season, many sand mines in most of the districts are currently flooded and repair work of ramp and access road is also being done in many sand mines. In these sand mines, the work of loading and transport will start in the coming days, which is expected to reduce the price further.