Fodder Scam: Lalu Yadav has to wait for another week as hearing on bail deferred till February 5 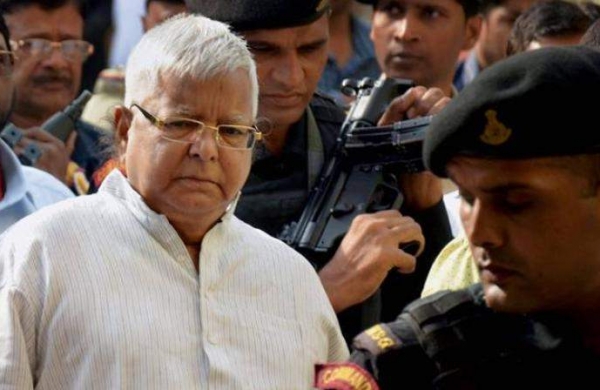 Express News Service
RANCHI: Jailed RJD chief Lalu Prasad Yadav will have to wait for another week as hearing on his bail application in the fodder scam case was deferred till February 5.

The Court of Justice Aparesh Kumar Singh was hearing a bail application filed by Yadav in a case related to illegal withdrawal of Rs 3.13 crore from Dumka Treasury.

The bail application has been filed in Jharkhand High Court on the ground that the RJD chief has completed half of his sentencing pronounced by the court in RC 38A/96 related to Dumka Treasury.

“The CBI counsel sought time on the ground of taking instructions from the department which was allowed by the Court. CBI has been asked to file a reply to the supplementary affidavit filed by us before the next hearing,” said RJD Chief’s advocate Prabhat Kumar. The case will further be taken up next on February 5, he added.

Kumar further added that according to their calculation, the Yadav has completed more than half of the sentencing awarded to him in Dumka Treasury and believed that he will be granted bail by the Court.”To rule out any suspicion, orders of the trail sheet have been attached with the supplementary affidavit,” said the advocate.

Meanwhile, looking at deteriorating health conditions, the former Bihar CM is a chronic patient of hypertension, diabetes, heart, kidney, and several other ailments, he has been shifted to All India Institute of Medical Sciences (AIIMS) Delhi after he complained of problem in breathing.

After being convicted by a Special CBI Court in Ranchi on December 23, 2017, in the second fodder scam case involving the illegal withdrawal of Rs 89.27 lakh from Deoghar treasury, the 72-year-old leader was lodged in Birsa Munda Central jail in Ranchi but was shifted to RIMS on August 29, 2018, looking at his deteriorating health conditions.