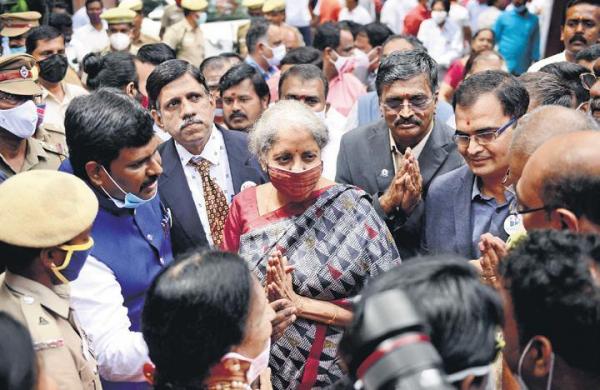 By Express News Service
CHENNAI: Union Finance Minister Nirmala Sitharaman termed the steep hike in fuel prices as a ‘vexatious issue’ and stressed on need for a Centre-State dialogue on imposing GST on the commodity to bring in uniformity across the country. Both Centre and State will have to sit together to see if there is a way in which consumer-end purchasing power or retail price of fuel is at a reasonable level, said Sitharaman during a Chennai Citizens’ forum meeting.

“If States agree on a price, then across the country there will be just one price rather than the current situation. The anomaly can be addressed if it comes under the GST. If all of us are talking about bring the consumer price down, tax raised by the State and the Centre are not holier than one another,” she said.She added that there has been a hike in the price of Brent crude since November. Equally, the OPEC production is also likely to come down, further aggravating the stress on prices, said Sitharaman.

“It is the oil marketing companies of the country that that have to decide on cutting it down or taking it up. Technically, oil prices have been freed; the government has no control over it. It is the marketing companies which import crude, refine it, and then distribute it putting the cost of logistics, etc.,” she added. The Finance Minister also exhorted the private sector to take advantage of the corporate tax rate cut and other initiatives of the government, and unleash ‘animal spirits’ by enhancing investments to make India one of the fastest growing economies of the world.

She said the government has been waiting for an expansion by the private sector. This comes after one of the biggest reduction of corporate tax rates in September 2019, by up to 10 percentage points, to attract private investment and reinvigorate the sagging economy. The tax break resulted in financial implication of Rs 1.45 lakh crore on the exchequer. Base corporate tax rate for existing companies was reduced to 22 per cent from 30 per cent, and to 15 per cent from 25 per cent for manufacturing firms incorporated after October 1, 2019, and starting operations before March 31, 2023.

Addressing industry leaders at an All India Management Association (AIMA) virtual event, she said the recent Budget had addressed several issues which were critical for the country to have a clearer path for the next decade or more. The Budget comes against the backdrop of the pandemic and a contraction in the economy to give a sense of certainty to businesses that policies will remain predictable, she said.

With regard to disinvestment, the Minister said that the government had identified the core sector where it will have bare minimum presence and the rest will be allowed for public-private partnership. The past strategy of disinvestment in trickles has not really been so successful in spreading the ownership pattern, she said, adding that it was not enthusiastically received.

She said the disinvestment or privatisation of units is not because the government wants them to close down. “The government wants these units to be running, to be kept up and running professionally as the economy has very high demand for many of these items, such as steel, coal or copper, or many such things in which PSUs are there for decades now,” she said.