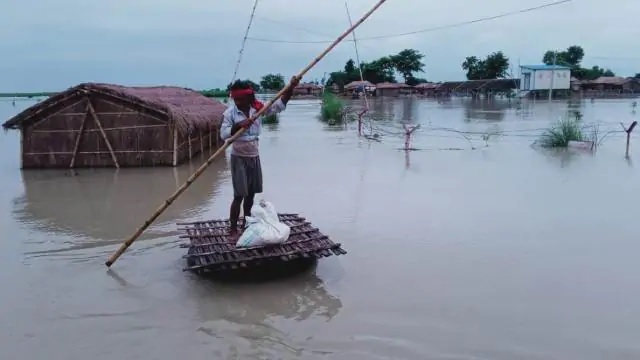 In North Bihar, the flood-erosion crisis due to fluctuations in the water level of rivers still persists in many districts. On Sunday, flood water entered more than half a dozen mohallas of Darbhanga city as Bagmati’s water level rose. Water has reached from one to two feet in many mohallas including Bela, Jalan College area, Naya Gharari, in the western part of the city.

The situation in many other mohallas has become critical due to flood waters coming from NH 57. Flood waters have been spreading in the adjoining areas of Darbhanga for many days, people are facing a lot of problems due to non-availability of boat facilities. On the other hand, there is an increased risk of traffic disruptions due to water logging on the Kamatoul-Bharwada road in Singhwara block. Hanumannagar block is not taking the name of reducing flood water, it has caused problems for the people.

Kesariya block of East Champaran still remains flood prone. In urban areas also, people are scared due to increasing flood water. At the same time, there is some relief from the decrease in the level of Gandak in Chatia. On the other hand, 142100 cusecs of water has been released in Gandak on Sunday from Valmikinagar Barrage. Right now Gandak’s situation is normal, West Champaran is in trouble. Nevertheless, due to the rains in the Terai areas since Sunday evening, the people of Diyara have once again increased their concern.