First vaccine dose may be available in a few weeks: PM 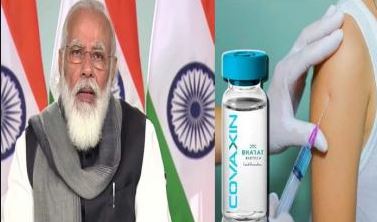 The work of making Corona virus vaccine in the country is in full swing. Five vaccines are being developed here. Apart from this, preparations for vaccination have also started. Let us know what is the latest update about the Kovid-19 vaccine. Prime Minister Narendra Modi said that the Kovid-19 vaccine in India could be ready in a few weeks and the vaccination campaign will be started in the country as soon as scientists get the green signal.

The ministry said that the vaccine of Kovid-19 will be first given to about one crore health workers including doctors and nurses. He said that after this, about two crore people working on the front front, including police, armed forces personnel and corporation personnel, will be vaccinated.

The number of infectives crossed 95.71 lakh on Friday after 36,595 new cases of Kovid-19 were reported in the country. With over 90 lakh people becoming infection-free, the national rate of recovery of infected people rose to 94.20 percent.

CM Shri Chouhan calls on by representatives of Swarnkar Samaj