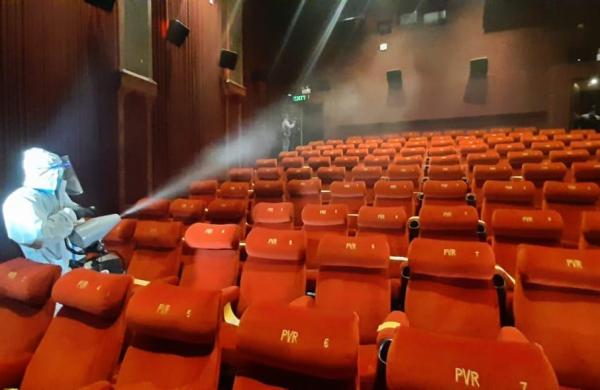 By Express News Service
NEW DELHI: Cinema halls will operate at 100 per cent capacity from Monday, Union Minister for Information and Broadcasting Prakash Javadekar said on Sunday, while releasing the standard operating procedure (SOP) on preventive measures for Covid-19.

The restrictions put in place due to the pandemic are on the verge of ending, he said.

The SOP said no exhibition of films will be allowed in containment zones and that states/UTs may consider proposing additional measures as per their field assessment.

Digital booking of tickets and staggered show timings to avoid crowding will be encouraged, the minister said, releasing a set of the Standard Operating Procedures (SOPs).

Adequate physical distancing of at least six feet has to be followed outside the auditoriums, common areas and waiting areas at all times, and use of face covers/masks at all times will be mandatory.

The SOP also mandates self-monitoring of health by all and reporting any illness at the earliest to state and district helpline. Use of Aarogya Setu app is advisable.

Welcoming the decision, the Producers Guild of India tweeted to “extend our sincere gratitude” to “Javadekar ji and everyone involved in facilitating this important step in our industry’s recovery.”

The Multiplex Association of India also took to Twitter and shared that they were grateful to the minister for the decision and thanked actor-BJP MP Sunny Deol for his support.

The minister also said digital booking of tickets, and staggered show timings in order to avoid overcrowding will be encouraged.

Sufficient number of box office counters will be opened and purchase of tickets at the box office will be allowed throughout the day in addition to the option of booking in advance to avoid crowding at the sale counters.

The Producers Guild of India, headed by producer Siddharth Roy Kapur, took to Twitter and wrote that lifting of the occupancy cap was a necessary step to revive the industry.

“We welcome the decision of @MIB_India to allow 100% capacity in cinemas from February 1 and extend our sincere gratitude to Honourable @PrakashJavdekar ji and everyone involved in facilitating this important step in our industry’s recovery,” the Guild tweeted.

The Multiplex Association of India also took to Twitter and shared that they were grateful to Javadekar for the decision and thanked actor-BJP MP Sunny Deol for his support.

“We are deeply grateful to Hon. Minister @PrakashJavdekar & @MIB_India for allowing 100% seating capacity in Cinemas from 1 Feb. We would like to extend our gratitude to Hon. MP @iamsunnydeol for his leadership and support,” the tweet read.

According to new guidelines, no film shall be allowed to screen in containment zones and states and union territories may consider “proposing additional measures” as per their assessment.

Post lockdown, the Centre had allowed reopening of theatres and multiplexes in several regions, including Delhi, parts of Madhya Pradesh and Gujarat on October 15, 2020 with 50 per cent occupancy, functioning with stringent dos and don’ts, keeping in view the new normal.

Gautam Dutta, CEO, PVR Limited, said allowing 100 per cent occupancy in cinema halls would give the multiplex industry a “much needed boost.”

“This move would give confidence to the producers to release their much awaited films and audiences to return to the cinemas to watch their choicest movies in the company of their loved ones,” Dutta said in a statement.

Tandon said the decision would now encourage producers to roll out their release slate of films.

“This would ease the apprehensions in the minds of content producers and studios, who may now announce the release dates of their movies. We now look forward to the State Governments to provide us the nod to implement the revised guidelines,” Tandon said in a statement.

Due to the shutting down of cinema halls for more than six months last year, many big ticket films, including Akshay Kumar’s “Laxmii”, Vidya Balan-starrer “Shakuntala Devi” and Amitabh Bachchan’s “Gulabo Sitabo” — had a direct-to-digital release.

Tent pole Hindi movies “Sooryavanshi”, “83” and “Laal Singh Chaddha”, which were pushed due to the pandemic are still awaiting a release date.

With the permission to cinema halls to run on full occupancy, the industry now doesn’t have “any excuses” to hold back release, Bihar-based exhibitor Vishek Chauhan said.

“Now, the industry needs to plan out a proper release strategy. What we can’t afford is to overcrowd, clash our films on holidays – Eid, Independence day, Diwali. The first film to bell the cat would probably be ‘Sooryavanshi’, which the entire industry has been waiting for to bring the audiences back to theatres.

“Once its release date is announced, within a week 20 films will be announced. This is a great news for exhibitors. Finally Bollywood has no excuses left,” Chauhan told PTI.

While the debate on the future of cinema halls due to the dependence on OTT platforms has only raged since the pandemic, producer Tanuj Garg is hopeful that the latest decision by the government will usher in an era of coexistence.

“Good news. Back to 100% capacity for cinemas soon. Contrary to perception, I don’t believe the theatrical medium will ever pass away in #India. Time for OTT and cinemas to co-exist peacefully,” Garg, who is backing Taapsee Pannu’s “Looop Lapeta”, tweeted.