Fight not over, government must formally repeal farm laws, give legal guarantee for MSP: Punjab villagers 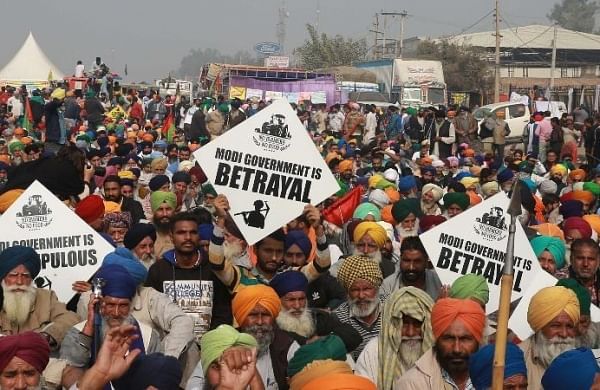 MOHALI: For 62-year-old Bhupinder Kaur, who has been part of demonstrations since last year against three central farm laws, the fight is far from over, even after Prime Minister Narendra Modi’s announcement that they will be repealed.

The fight will not be over till the laws are formally repealed in Parliament and farmers’ demand for legal guarantee of Minimum Support Price (MSP) for crops is fulfilled, said Kaur as she along with other elderly women from Chilla village in poll-bound Punjab’s Mohali district prepared langar’ at a local gurudwara.

The prime minister in his address to the nation on Friday announced repeal of the laws, which triggered a year of protests by farmers, and had also said the constitutional formalities to revoke the laws will be done during the winter session of Parliament, which begins on November 29.

Kaur’s views were echoed by others as they discussed the nearly year-long protests against the laws while preparing food at a ‘langar’.

Formally rollback the laws in Parliament and give legal guarantee of MSP on crops, these are the demands, they said, adding that families of farmers who lost their lives in protests, which began last year November, must be given financially compensation.

The prime minister’s announcement was warily welcomed on Friday by farmers’ unions spearheading the agitation but they said protests will continue till the measures are repealed in Parliament and MSP gets legal guarantee.

Chilla village has a population of around 2,000 people, and villagers, who are not aligned to any farmer outfit, are actively participating in the agitation against the laws at the Singhu border, attending it in batches.

The Singhu border between Delhi and Haryana was the fountainhead of the farmers’ protest, which started last year in November, two months after enactment of the laws.

From there the movement gradually expanded to the Ghazipur border between Delhi and Uttar Pradesh and other sites.

The women of Chilla village along with their children also stand near a traffic light point every day to muster support for protesting farmers.

Similarly, residents of nearby villages of Manauli, Bhago Majra, Sante Majra, Chhota Raipur and Bada Raipur have also been going to protest sites on Delhi’s borders.

Bhupinder Kaur, who also has been going to the Singhu border regularly, told PTI: “Till the three farm laws are repealed in Parliament, our struggle continues.”

Malkit Kaur, who along with some other women was chopping vegetables for the langar, was sceptical about the prime minister’s statement and said the government should formally roll back the laws.

On Saturday, Punjab Chief Minister Charanjit Singh Channi had asked farmers to be cautious till the farm laws are repealed, saying Prime Minister Modi has only made an announcement on it.

However, the announcement on Guru Nanak Jayanti was enough to get villagers in Chilla to celebrate.

“Somebody called me up and said congratulations. I thought it will be for Gurpurab but when he told me about repealing of the laws, I left my meal midway and went straight to the gurdwara and announced to villagers that we have won,” Baba Sukhchain Singh, head of the gurdwara at Chilla village, said Singh said it was a fight for existence and collective support of the people proved that they can stand against government decisions which are not acceptable.

He claimed that farmers have enough ration to stay at Delhi’s borders till 2024.

Jagtar Singh Gill said people, especially in rural areas, will remember that it took one year for the BJP-led government to repeal the laws.

The anger against the BJP will not subside soon, he said.

“Farmers will also not forget that they were called terrorists, Khalsitani etc,” said Gill, claiming that “700 farmers died during the agitation.”

On the Punjab assembly polls, slated early next year, Gill advocated the idea of farmers to take an electoral plunge.

Singh said villagers, including women, will go in large numbers to Delhi’s border on the completion of one year of the struggle.

In Hoshiarpur, farmers continued with their protests, demanding a law for legal guarantee for MSP and compensation to families of farmers who died during the stir.

Farmer Kuljinder Singh Ghuman of Jatpur village said the announcement to repeal the laws is a big success not only for the farming community but also for the common man.

Jangveer Singh of Rasoolpur village said had the farm laws been withdrawn earlier, there would not have been so many deaths.

In Amritsar, panchayat member Heir Sarbjit Singh said, “Farmers are extremely happy with the announcement of repealing of the three central farm laws.”

Another farmer Gurjinder Singh, who has 35 acres of land near Raja Sansi, said the government should have repealed the farm laws earlier.

Punjab has remained the epicenter of the protests against Centre — Farmers’ Produce Trade and Commerce (Promotion and Facilitation) Act, 2020; Farmers’ (Empowerment and Protection) Agreement on Price Assurance and Farm Services Act, 2020; and the Essential Commodities (Amendment) Act, 2020.

But in November 2020, farmers from Punjab and Haryana moved to the Delhi borders to press the Central government to withdraw these laws.

They have also been demanding a new law to guarantee MSP for crops.